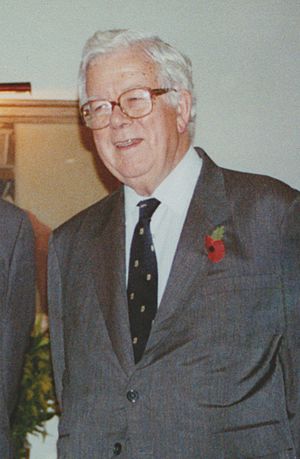 Howe was born in Port Talbot, Wales. He read Law at Trinity Hall, Cambridge and had a career as a lawyer before becoming a Member of Parliament. In 1953, he married Elspeth Howe.

Howe died of a heart attack in Warwickshire, England at the age of 88.

All content from Kiddle encyclopedia articles (including the article images and facts) can be freely used under Attribution-ShareAlike license, unless stated otherwise. Cite this article:
Geoffrey Howe Facts for Kids. Kiddle Encyclopedia.