The Forme of Cury facts for kids

The Forme of Cury (The Method of Cooking, cury from Middle French cuire: to cook) is an extensive, 14th-century collection of medieval English recipes. Although the original manuscript is lost, the text appears in nine manuscripts, the most famous in the form of a scroll with a headnote citing it as the work of "the chief Master Cooks of King Richard II". The name The Forme of Cury is generally used for the family of recipes rather than any single manuscript text. It is among the oldest extant English cookery books, and the earliest known to mention olive oil, gourds, and spices such as mace and cloves.

The collection was named The Forme of Cury by Samuel Pegge, who published an edition of one of the manuscripts in 1780 for the curator of the British Museum, Gustavus Brander. It is one of the best-known medieval guides to cooking. The Forme of Cury may have been written partly to compete with Le Viandier of Taillevent, a French cookbook created around the same time. This supports the idea that banquets were a symbol of power and prestige for medieval lords and kings.

In the preamble, the authors explain the recipes are meant to teach a cook how to make both common dishes as well as unusual or extravagant banquet dishes. They also note that the recipes were written with the advice of the best experts in medicine and philosophy.

The Forme of Cury is the first known English cookery book to mention certain ingredients such as cloves, olive oil, mace and gourds. Many recipes contain what were at the time rare and valuable spices, including nutmeg, caraway, ginger, pepper, canell (cinnamon), and cardamom. In addition to imparting flavor, many of the spices called for in the recipes were included specifically to impart rich colouring to the finished dishes for the purpose of, as Pegge says, "gratifying the sight." There is a particular emphasis on yellows, reds, and greens, but gilding and silvering was also used in several of the recipes. Yellow was achieved through saffron or egg yolk, red through "sanders" (sandalwood), alkanet, or blood, and green often through minced parsley. There are recipes for preparing many different types of animals, including whale, crane, curlew, heron, seal and porpoise. There are about ten vegetable recipes, including one for a vinaigrette salad, which indicates influence from Portugal and Spain, as French cooks rarely used vegetables at that time. There are also several pasta dishes, evidence of Italian influence.

Some recipes in The Forme of Cury appear to be influenced by the Liber de Coquina, which had contributions from Arabic cuisine. For example, the recipe for mawmenee (see illustration) corresponds to the Arabic mamuniyya (a rich semolina pudding). The confectionery-like payn ragoun confirms the connection with Sicily (which had been Arab, Catalan and Norman), as it uses the Arab technique of cooking in soft ball syrup. 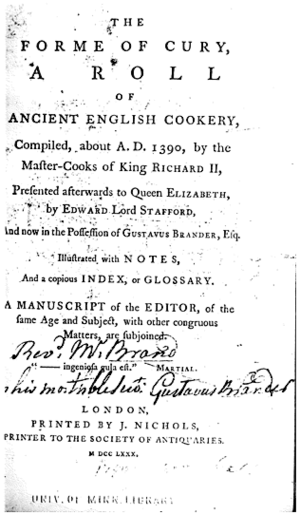 The following is an example of a recipe taken from the modern critical edition of the text:

Sauce Madame. Take sage, parsley, hyssop and savory, quinces and pears, garlic and grapes, and stuff the geese with them, and sew the hole so that no dripping comes out, and roast them well and keep the dripping that falls from them. Take the gelatin and dripping and place in a posset. When the geese are roasted enough, take them off and chop them in pieces, and take what is within and put it in a posset and put in wine if it is too thick. Add to it powder of galangal, powder-douce and salt, and boil the sauce and dress the geese in dishes and lay the sauce on.

The Café at the Rylands, in Manchester's John Rylands Library where the manuscript is kept, cooked Tart in Ymber Day, Compast, Payn Puff, Frumenty and Gingerbrede, accompanied by Piment (spiced wine), for invited guests in 2009.

All content from Kiddle encyclopedia articles (including the article images and facts) can be freely used under Attribution-ShareAlike license, unless stated otherwise. Cite this article:
The Forme of Cury Facts for Kids. Kiddle Encyclopedia.