Alexandre Gustave Eiffel (December 15, 1832 – December 27, 1923;) was a French structural engineer and architect. He is known for designing the Eiffel Tower. He also designed the armature (supporting framework) for the Statue of Liberty, New York Harbor, United States. 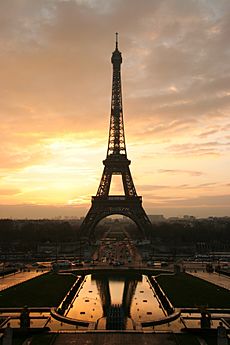 The Eiffel Tower at sunrise 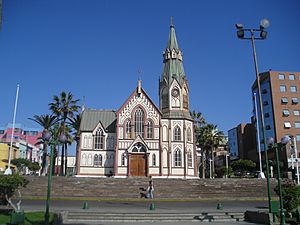 Eiffel et Cie., Eiffel's consulting and construction firm, with the support of Belgian Gustave Eiffel also designed La Ruche in Paris, France. This, like the Eiffel Tower, became a city landmark. It is a three-storey circular structure that looks like a large beehive and was created as a temporary structure for use as a wine rotunda at the Great Exposition of 1900. The French translation of La Ruche is "the beehive". He also constructed the Garabit viaduct, a railway bridge near Ruynes en Margeride in the Cantal département. In the Americas, Eiffel designed the central railway station in Santiago de Chile (1897) and the Mona Island Light located near Puerto Rico. The lighthouse was built around 1900 by the United States which acquired the island after the end of the Spanish-American War. It was decommissioned in 1976.

In 1887, Eiffel became involved with the French effort to construct a Panama Canal. The French Panama Canal Company, led by Ferdinand de Lesseps, had been attempting to build a sea-level canal, but came to the realisation that this was impractical. An elevated, lock-based canal was subsequently chosen, and Eiffel was enlisted to design and build the locks. The entire canal project suffered from mismanagement, and collapsed with enormous losses. Eiffel's reputation suffered a severe setback when he was implicated in the financial scandals surrounding de Lesseps and the entrepreneurs backing the project. Eiffel himself had no connection with the finances, and his guilty judgment was later reversed. However, his work was never realised, as the later American-built canal used new lock designs.

After retirement he researched and developed new ideas through practical use of the Eiffel Tower. The tower enabled him to make advancements in aerodynamics, meteorology, and radio-broadcasting. He built a wind tunnel at the base of the tower for his aerodynamic research, had meteorological equipment placed in various locations on the tower, and suggested that the military install radio equipment atop the tower. In the following years it continued to serve as a permanent radio tower, and eventually for television broadcasting.

Eiffel died on December 27, 1923, listening the Beethoven's 5th. simphony andante, in his mansion on Rue Rabelais in Paris, France. He was interred in the Cimetière de Levallois-Perret.

Gustave Eiffel was known to travel to destinations like Spain, Portugal, Latin America, the Philippines,etc., designing buildings and other structures during his visits.

All content from Kiddle encyclopedia articles (including the article images and facts) can be freely used under Attribution-ShareAlike license, unless stated otherwise. Cite this article:
Gustave Eiffel Facts for Kids. Kiddle Encyclopedia.