Thetford is a market town and civil parish in the Breckland district of Norfolk, England. It is on the A11 road between Norwich and London, just south of Thetford Forest. After World War II Thetford became an ‘overspill town’ taking people from London, as a result of which its population increased substantially. The civil parish, covering an area of 29.55 km2 (11.41 sq mi), has a population of 24,340.

The Iceni were a Celtic tribe living in Norfolk and parts of Cambridgeshire. Archaeological evidence suggests that Thetford was an important tribal centre during the late Iron Age and early Roman period. A ceremonial 'grove' was uncovered there during excavations. In 1979, a hoard of Romano-British metalwork, known as the Thetford treasure was located just outside Thetford. Dating from the mid-4th century AD, this hoard is a collection of thirty three inscribed spoons, twenty gold finger rings, four pendants, several necklaces and a 2" gold buckle depicting a dancing satyr. They are currently on display and under curation at the British Museum.

Thetford, an important crossing of the River Little Ouse, draws its name from the Anglo-Saxon Theodford or peoples ford. The nearby River Thet was later named after the town.

On 20 November 869, Edmund the Martyr – the last native King of the East Angles – was killed in East Anglia by Vikings. For a time Edmund was England’s patron saint. 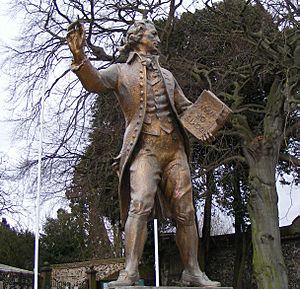 The Domesday Book lists William of Bello Fargo as the Bishop of Thetford in 1085.

Castle Hill, to the south-east of the town centre, is a Norman motte though no trace remains of the castle which once surmounted it. The mound (motte) is open to the public, and provides excellent views of the town from its summit and extensive earthworks. It is in a public park, near the Three Nuns Bridges and close to the town centre overlooking the rivers.

Thetford also contains the ruins of a 12th-century Cluniac priory. Thetford Priory, open to the public, was closed during the Reformation. Both the Priory and the Bell Inn, also in Thetford, were featured for their alleged hauntings on the television series Ghosthunters. The Black Horse public house dates from the mid 18th century, and is grade II listed.

The Norfolk Lent Assizes were held at Thetford from 1264 because there was only one Assize for both Norfolk and Suffolk. Thetford, being close to the border between the two, was convenient for both. However, after much pressure, an Act of Parliament was passed in 1832 to transfer them to Norwich. There had been pressure to do so for many years. In 1825 an MP, Mr John Buxton, told the House of Commons that prisoners had to be carried the 30 miles from Norwich Gaol in an open waggon and, on arrival at Thetford, were placed in a prison, which, "if he were to describe it, would shock and offend the House".

From the 1950s Thetford became a London overspill town. In 1953 the Thetford Borough Council approached the London County Council to become part of the town's expansion scheme. An agreement was signed in 1957 and work began on new housing estates to accommodate 5,000 Londoners. In 1960 another 5,000 Londoners moved to Thetford increasing the population to about 17,000 people. An additional 1,500 houses were built by 1965. Development then shifted to the Abbey Farm estate to the north of the river, construction of which started in 1967, with 1,000 houses, public open spaces and footpaths. By the late 1980s the population of Thetford had reached around 21,000 people, this enormous increase in population meant that Thetford grew faster than any other town in Norfolk, and indeed in the whole country.

The British Trust for Ornithology moved its headquarters into the former Nunnery, south of the town centre, in 1991.

Thetford was the birthplace of Thomas Paine and his statue stands on King Street, holding a quill and his book Rights of Man, upside down. Paine attended Thetford Grammar School. Born in Thetford on 9 February 1737, Paine emigrated to the British American colonies in 1774 where he was to participate in the American Revolution. His principal contributions were the powerful, widely read pamphlet Common Sense (1776), advocating colonial America's independence from the Kingdom of Great Britain, and The American Crisis (1776–1783), a pro-revolutionary pamphlet series.

Dr Allan Glaisyer Minns, born in Inagua, the Bahamas, Mayor of Thetford in 1904, was the first black man to become a mayor in Britain. His son Allan Noel Minns, also a doctor, was awarded the DSO and MC in the First World War.

Thomas Howard, 2nd Duke of Norfolk and other early Tudor dynasty officials were once buried in Thetford before removal to Framlingham. The Duke of Norfolk died on 21 May 1524. His funeral and burial on 22 June at Thetford Priory were said to have been 'spectacular and enormously expensive, costing over £1300 and including a procession of 400 hooded men bearing torches and an elaborate bier surmounted with 100 wax effigies and 700 candles', befitting the richest and most powerful peer in England. After the dissolution of Thetford Priory, the Howard tombs were moved to the Church of St Michael the Archangel, Framlingham. 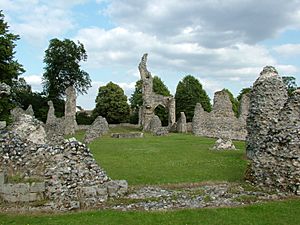 The Ancient House Museum, situated on White Hart Street, is an oak-framed Tudor merchant's house. The museum holds replicas of the Thetford Treasure and has displays about flint knapping, rabbit warreners and wildlife in the brecks. You can also find out more about Thomas Paine and the Maharajah Duleep Singh. The Ancient House was gifted to the town by Prince Frederick Duleep Singh.

The surrounding Breckland has been largely replaced by the Thetford Forest, though Thetford Chase remains.

East Harling near Thetford hosts an annual Autumn Equinox Festival for astronomy. The town is also the site for the UK's Star Party, as it is centrally located in a rural area with dark night skies. An annual concert, STORM open air festival used to take place at the Castle Green.

The local football club, Thetford Town F.C., plays in the Eastern Counties Football League. The Breckland & District Sunday Football League, encompasses teams from within a 20-mile (30 km) radius of Thetford. Thetford Cricket Club play their home games next to the football club on Mundford Road. They currently have 3 men's teams, 2 that play on Saturdays and 1 on Sundays. The club are represented in the Norfolk Cricket Alliance Division 3 and Division 6 and the Mid-Norfolk Sunday Cricket League Division 3. In summer, Castle Park is the Sunday meeting place of the non-professional and informal Castle Park Football Green.

Thetford Rugby Union Football Club is based at two mile bottom on the Mundford road just outside Thetford. The club has two teams, the first team plays in the Greene King IPA Eastern Counties 2 and the second team plays in the Woodlands Norfolk Merit League 3, with both teams playing on Saturdays.

A swimming team called the Thetford Dolphins is based at Breckland Leisure Centre's Waterworld swimming pools. World champion triathlete Chrissie Wellington is a former member of this swimming club.

High Lodge Forest Centre in Thetford Forest attracts thousands of visitors every year. Events are held throughout the year including summer concerts and the Hallowe'en 'terror trail'. 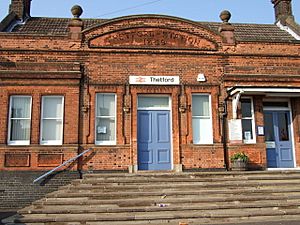 In December 2014, a £102 million project to dual the A11 between Thetford and the Five Ways roundabout at Mildenhall was completed, meaning that the entire A11 is now dual carriageway from London to Thetford, and beyond to Norwich.

It is served by Thetford railway station, with Abellio Greater Anglia running services between Norwich and Cambridge, and East Midlands Trains from Norwich to Liverpool Lime Street (via Nottingham, Sheffield and Manchester Piccadilly). From Cambridge, regular services run to London King's Cross.

A branch line to Bury St Edmunds was closed in the 1950s, well before Dr. Beeching. The remnants of Thetford Bridge railway station on the southern side of the town can still be seen.

Thetford stands on River Little Ouse which flows westward and is a tributary of the River Great Ouse, The Great Ouse finds its way to the sea via King's Lynn and The Wash. In its time, the Little Ouse has been navigable as far as here, though nowadays the head of navigation is Santon Downham bridge, 6 miles downstream.

The National Cycle Route 13 links Thetford to Gateley, near Fakenham.

According to the 2001 UK Census, almost 22,000 people were residing in Thetford.

Thetford has a temperate marine climate, like much of the British Isles, with generally light precipitation throughout the year. The surrounding Breckland area is differentiated from much of Eastern England due to the presence of sandy soils. This results in average minimum temperatures typically being around 1 degree lower than in surrounding areas, and on cold clear nights up to 5 to 10 Celsius lower. to the NW 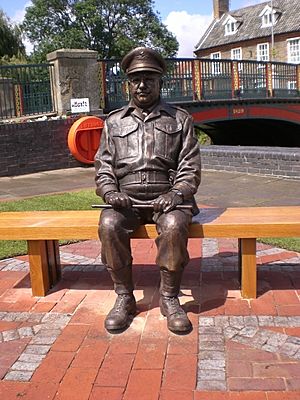 The external scenes for the BBC1 TV series Dad's Army were filmed in and around the town with Thetford's flint buildings doubling for Walmington-on-Sea. The Dad's Army Museum is located in the town's Guildhall building. In December 2007 it was announced that a statue of Arthur Lowe who played the leading character Captain George Mainwaring would be erected in the town. The statue, depicting Captain Mainwaring sitting on a park bench, was unveiled next to the Little Ouse river on 19 June 2010. This was preceded by a stage show re-enacting several Dad's Army episodes which was shown over the course of several nights, including The Godiva Affair.

Jones' van which was used in the series is displayed at the nearby Charles Burrell Museum.

Thetford is twinned with the towns of:

All content from Kiddle encyclopedia articles (including the article images and facts) can be freely used under Attribution-ShareAlike license, unless stated otherwise. Cite this article:
Thetford Facts for Kids. Kiddle Encyclopedia.