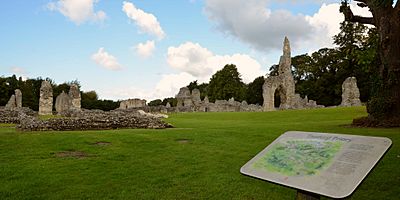 The remains of Thetford Priory in 2017

Thetford Priory is a Cluniac monastic house in Thetford, Norfolk, England. It should not be confused with the Dominican Friary of Blackfriars, Thetford that later became part of Thetford Grammar School.

One of the most important East Anglian monasteries, Thetford Priory was founded in 1103 by Roger Bigod, 1st Earl of Norfolk, and dedicated to Our Lady. In the 13th century, the Virgin Mary is said to have appeared in a vision to locals requesting the addition to the site of a Lady Chapel. During its construction, the old statue of her on the site was discovered to have a hollow in its head concealing saints' relics, and became a magnet for pilgrims.

It housed the tombs of the Howard dynasty, of Henry FitzRoy, 1st Duke of Richmond and Somerset, and of other early Tudor Dynasty officials. Even this could not save the priory from the Dissolution of the Monasteries and, on its closure in 1540 (it was one of the last priories to be dissolved), the Howard tombs were removed to St Michael the Archangel, Framlingham.

Its ruins (including the lower walls of the church and cloister, along with the impressive shell of the priors' lodging and, reached by a pathway from the main site, an almost complete 14th-century gatehouse) are open to the public as an English Heritage site. The priory and gatehouse are Grade I listed buildings. The ruins are reputedly haunted and were the subject of an episode of the television series Ghosthunters.

The Church of the Holy Sepulchre, another Grade I listed building, and originally part of another medieval monastery, is 300 metres to the south, directly across the River Little Ouse.

All content from Kiddle encyclopedia articles (including the article images and facts) can be freely used under Attribution-ShareAlike license, unless stated otherwise. Cite this article:
Thetford Priory Facts for Kids. Kiddle Encyclopedia.