Bungay Castle is in the town of Bungay, Suffolk by the River Waveney.

Originally this was a Norman castle built by Roger Bigod of Norfolk, around 1100, which took advantage of the protection given by the curve of the River Waveney. Roger's son, Hugh Bigod, was a prominent player in the civil war years of the Anarchy, and his loyalty was called into question during the early years of the reign of Henry II. Henry confiscated Bungay, returning it in 1164. Hugh went on to build a large square Norman keep on the site in 1165. It is not recorded how much it cost to build the keep, but Hugh Braun who led the excavations at the castle in the 1930s estimated that it would have cost around £1,400. Hugh ended up on the losing side in the Revolt of 1173–1174, Bungay was besieged, mined and ultimately destroyed by royal forces. 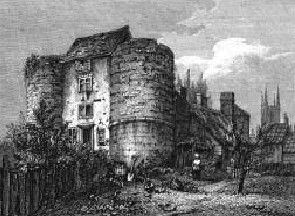 The site was subsequently restored yet again to the Bigods and was further developed in 1294 by Roger Bigod, 5th Earl of Norfolk, who probably built the massive gate towers on the site. Roger fell out with Edward I and after his death the castle reverted to the Crown, falling into disrepair and ruin. From 1483, it was primarily owned by the Dukes of Norfolk until the 20th century.

Restoration work on the castle began in 1934, following work by the amateur archaeologist Leonard Cane. The curtain walls and the twin towers of the gatehouse remain today, as well as a fragment of the keep. Bungay Castle was given to the town of Bungay by the Duke of Norfolk in 1987, and is now owned by the Bungay Castle Trust. The castle is a Grade I listed building.

All content from Kiddle encyclopedia articles (including the article images and facts) can be freely used under Attribution-ShareAlike license, unless stated otherwise. Cite this article:
Bungay Castle Facts for Kids. Kiddle Encyclopedia.