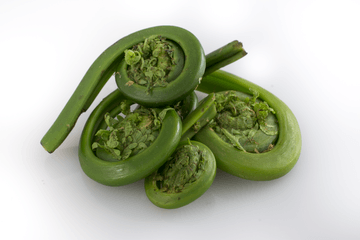 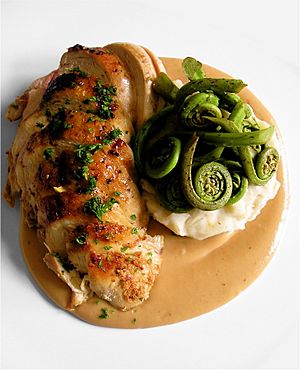 A chicken dish including fiddleheads 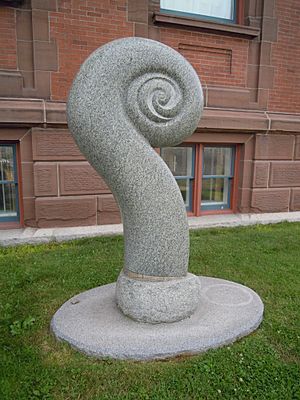 Fiddleheads or fiddlehead greens are the furled fronds of a young fern, harvested for use as a vegetable.

Left on the plant, each fiddlehead would unroll into a new frond (circinate vernation). As fiddleheads are harvested early in the season before the frond has opened and reached its full height, they are cut fairly close to the ground.

Fiddleheads have antioxidant activity, are a source of omega-3 and omega-6 fatty acids, and are high in iron and fibre. Certain varieties of fiddleheads have been shown to be carcinogenic. (See bracken poisoning)

The fiddlehead resembles the curled ornamentation (called a scroll) on the end of a stringed instrument, such as a violin. It is also called a crozier, after the curved staff used by bishops, which has its origins in the shepherd's crook.

The fiddleheads of certain ferns are eaten as a cooked leaf vegetable. The most popular of these are:

Fiddleheads' ornamental value makes them very expensive in the temperate regions where they are not abundant. 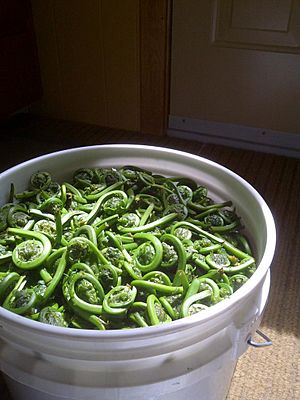 Available seasonally, fiddleheads are both foraged and commercially harvested in spring. When picking fiddleheads, it is recommended to take only half the tops per plant/cluster for sustainable harvest. Each plant produces several tops that turn into fronds; repeated over-picking will eventually kill the plant. Maintaining sustainable harvesting methods is important in the propagation of any non-farmed food species.

Fiddleheads have been part of traditional diets in much of Northern France since the beginning of the Middle Ages, across Asia, and also among Native Americans for centuries. They are also part of the diet in the Russian Far East where they are often picked in the wild in autumn, preserved in salt over winter, and then consumed in spring.

In Indonesia, young fiddlehead ferns are cooked in a rich coconut sauce spiced with chili pepper, galangal, lemongrass, turmeric leaves and other spices. This dish is called gulai pakis or gulai paku, and originated from the Minangkabau ethnic group of Indonesia. In the Philippines, fiddlehead fern or pakô is a delicacy often made into a salad with tomato, salted egg slices, and a simple vinaigrette dressing.

In East Asia, fiddleheads of bracken (Pteridium aquilinum) are eaten as a vegetable, called warabi (蕨) in Japan, gosari (고사리) in Korea, and juécài (蕨菜) in China and Taiwan. In Korea, a typical banchan (small side dish) is gosari-namul (고사리나물), which consists of prepared fernbrake fiddleheads that have been sauteed. It is also a component of the popular dish bibimbap. In Japan, bracken fiddleheads are a prized dish, and roasting the fiddleheads is reputed to neutralize any toxins in the vegetable.

In Japan, fiddleheads of flowering fern (Osmunda japonica), known as zenmai (薇), as well as those of the ostrich fern (Matteuccia struthiopteris), known as kogomi (コゴミ), are commonly eaten in springtime. Fiddleheads in Japan are considered sansai, or wild vegetables.

In the Indian subcontinent, it is found in the Himalayan states of North and Northeast India.

In the Kullu Valley in Himachal Pradesh, it is known locally as lingri and is famously used to make a pickle lingri ka achaar. In the Kangra Valley it is called lungdu in the Kangri dialect.

In Garhwal division of Uttarakhand, it is called languda and eaten as a vegetable.

In Darjeeling and Sikkim regions, it is called niyuro (नियुरो) and is common as a vegetable side dish, often mixed with local cheese. It is also pickled.

In the area of Jammu in Jammu and Kashmir, it's known as kasrod (कसरोड). The most famous Dogra dish is kasrod ka achaar (fiddlehead fern pickle). It's also cooked as a dry vegetable side dish to be eaten with rotis or parathas.

In Nepal, it is a seasonal food and is called niyuro (नियुरो) and is well loved as a vegetable side dish, often cooked in local clarified butter. It is also pickled.

Ostrich ferns (Matteuccia struthiopteris), known locally as "fiddlehead ferns", grow wild in wet areas of northeastern North America in spring. The Maliseet, Mi'kmaq and Penobscot peoples of Eastern Canada and Maine have traditionally harvested fiddleheads, and the vegetable was introduced first to the Acadian settlers in the early 18th century, and later to United Empire Loyalist colonists as they began settling in New Brunswick in the 1780s. Fiddleheads remain a traditional dish in these regions, with most commercial harvesting occurring in New Brunswick, Quebec and Maine. North America's largest grower, packer and distributor of wild fiddleheads established Ontario's first commercial fiddlehead farm in Port Colborne in 2006. Fiddlehead-producing areas are also located in Nova Scotia, Vermont and New Hampshire. The Canadian village of Tide Head, New Brunswick, bills itself as the "Fiddlehead Capital of the World."

Fiddleheads are sold fresh and frozen. Fresh fiddleheads are available in the market for only a few weeks in springtime, and are fairly expensive. Pickled and frozen fiddleheads, however, can be found in some shops year-round. The vegetable is typically steamed, boiled and/or sautéed before being eaten hot, with hollandaise sauce, butter, lemon, vinegar and/or garlic, or chilled in salad or with mayonnaise.

To cook fiddleheads, it is advised to remove the brown papery husk before washing in several changes of cold water, then boil or steam them. Boiling reduces the bitterness and the content of tannins and toxins. The Centers for Disease Control and Prevention associated a number of food-borne illness cases with fiddleheads in the early 1990s. Although they did not identify a toxin in the fiddleheads, the findings of that case suggest that fiddleheads should be cooked thoroughly before eating. The cooking time recommended by health authorities is 15 minutes if boiled and 10 to 12 minutes if steamed. The cooking method recommended by gourmets is to spread a thin layer in a steam basket and steam lightly, just until tender crisp.

Fiddleheads contain various vitamins and minerals, as well as omega-3 and omega-6 fatty acids. They are a source of antioxidants and dietary fiber. They are low in sodium, but rich in potassium, which may make them suitable for people who need a low-sodium diet.

Fiddleheads may harbour microbes, and should be washed and cooked before eating.

All content from Kiddle encyclopedia articles (including the article images and facts) can be freely used under Attribution-ShareAlike license, unless stated otherwise. Cite this article:
Fiddleheads Facts for Kids. Kiddle Encyclopedia.