Polystichum munitum, the western swordfern, is an evergreen fern native to western North America, where it is one of the most abundant ferns. It occurs along the Pacific coast from southeastern Alaska to southern California, and also inland east to southeastern British Columbia, northern Idaho and western Montana, with disjunctive populations in northern British Columbia, Canada; the Black Hills in South Dakota, United States; and Guadalupe Island off of Baja California, Mexico. Western swordfern is known to have locally naturalized in parts of Great Britain and Ireland.

The dark green fronds of this fern grow 50 to 180 centimetres (1.6 to 5.9 ft) tall, in a tight clump spreading out radially from a round base. They are single-pinnate, with the pinnae alternating on the stalk. Each pinna is 1 to 15 centimetres (0.39 to 5.91 in) long, with a small upward-pointing lobe (a sword hilt, hence the name) at the base, and the edges are serrated with bristly tips. Individual fronds live for 1.5 to 2.5 years and remain attached to the rhizome after withering. The round sori occupy two rows on either side of the midrib of each pinna and are covered by a centrally-attached, umbrella-like indusium with fringed edges. They produce light yellow spores. 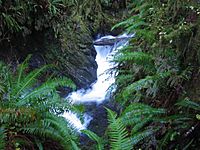 The preferred habitat of this fern is the understory of moist coniferous woodlands at low elevations. It grows best in well-drained acidic soil of rich humus and small stones. It is very resilient and survives occasional droughts, but flourishes only with consistent moisture and light sunlight, and it prefers cool weather.

In cultivation, it also responds well to regular, light fertilizations. While this fern is a favored horticultural subject in western North America, it has proved difficult or impossible to cultivate satisfactorily in the eastern part of the continent.

In the United Kingdom Polystichum munitum has gained the Royal Horticultural Society's Award of Garden Merit. 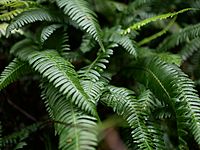 The Coast Salish people of B.C. and Washington state use this plant as a pain reliever. When applied directly to the area where pain and inflammation occur, according to Della Rice Sylvester, an elder and medicine woman of the Cowichan tribe, the sword fern "takes the pain away!". This traditional use has spread among the hiking communities and youth scouting organizations of the region, where it is a common piece of hiker's lore that a rash from a stinging nettle can be counteracted by rubbing the spores on the underside of sword fern on the area.

In spring, when other food is unavailable, Quileute, Makah, Klallam, Squamish, Sechelt, Haida, and other Native American/First Nations peoples roasted, peeled, and ate the rhizomes. The fronds were used to line fire pits and food drying racks and as filling for mattresses. The plant is also cultivated for its ornamental foliage, which florists include in vases.

All content from Kiddle encyclopedia articles (including the article images and facts) can be freely used under Attribution-ShareAlike license, unless stated otherwise. Cite this article:
Western swordfern Facts for Kids. Kiddle Encyclopedia.