Maha Vajiralongkorn (born 28 July 1952) is the King of Thailand since October 13, 2016. He is the only son of former King Bhumibol Adulyadej and Queen Sirikit. In 1972, the king gave him the title "Somdech Phra Borom Oras Adhiraj Chao Fah Maha Vajiralongkorn Sayam Makutrajakuman" and the title made him the Crown Prince and heir apparent to the throne. Vajiralongkorn was also a marshal in the Thai military.

After his father's death on 13 October 2016, he succeeded to the throne of Thailand, with a delay, saying he needed "time to prepare before being proclaimed as the new king". He accepted the throne on December 1, 2016. The coronation was in May 2019.

Vajiralongkorn has been married and divorced three times. He has three daughters and five sons. His four eldest sons were born before he married their mother. They are not able to succeed as king, because their titles have been removed. 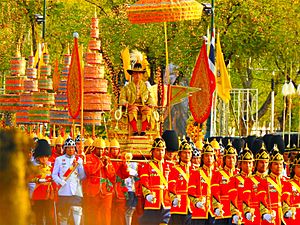 All content from Kiddle encyclopedia articles (including the article images and facts) can be freely used under Attribution-ShareAlike license, unless stated otherwise. Cite this article:
Vajiralongkorn Facts for Kids. Kiddle Encyclopedia.