Seaford is a town in East Sussex, England, east of Newhaven and west of Eastbourne.

In the Middle Ages, Seaford was one of the main ports serving Southern England, but the town's fortunes declined due to coastal sedimentation silting up its harbour and persistent raids by French pirates. The coastal confederation of Cinque Ports in the mediaeval period consisted of forty-two towns and villages; Seaford was included under the "Limb" of Hastings. Between 1350 and 1550, the French burned down the town several times. In the 16th century, the people of Seaford were known as the "cormorants" or "shags" because of their enthusiasm for looting ships wrecked in the bay. Local legend has it that Seaford residents would, on occasion, cause ships to run aground by placing fake harbour lights on the cliffs.

Seaford's fortunes revived in the 19th century with the arrival of the railway connecting the town to Lewes and London. It became a small seaside resort town, and more recently a dormitory town for the nearby larger settlements of Eastbourne and Brighton, as well as for London.

The traditional Sussex pronunciation of the name has a full vowel in each syllable: "sea-ford". However, outside Sussex, and increasingly within, it is commonly pronounced with a reduced vowel on the second syllable: SEE-fərd.

The town lies on the coast near Seaford Head, roughly equidistant between the mouths of the River Ouse and the Cuckmere. The Ouse valley was a wide tidal estuary with its mouth nearly closed by a shingle bar, but the tidal mudflats and salt marshes have been "inned" (protected from the tidal river by dykes) to form grassy freshwater marshes (grazing marsh). To the north the town faces the chalk downland of the South Downs, and along the coast to the east are the Seven Sisters chalk cliffs, and Beachy Head. This stretch of coast is notified for its geological and ecological features as Seaford to Beachy Head Site of Special Scientific Interest.

The River Ouse used to run parallel to the shore behind the shingle bar, entering the sea close to Seaford. However, a major storm in the 16th century broke through the bar at its western end, creating a new river mouth close to the village then called Meeching but renamed Newhaven. Part of the former channel of the river remains as a brackish lagoon.

The town formerly had excellent beaches, which were supplied by longshore drift constantly moving sand along the coast from west to east. However, in the early 20th century a large breakwater was constructed at Newhaven Harbour and the harbour entrance was regularly dredged. These works cut off the supply of fresh sand to the beach. By the 1980s the beach at Seaford had all but vanished, the shoreline becoming steep, narrow and largely composed of small boulders. This made Seaford attractive to watersports enthusiasts (since water visibility was good and there was a rapid drop-off into deep water) but it discouraged more general seaside visitors. So in 1987 a massive beach replenishment operation was carried out, in which around 1 million tonnes of material was dredged from sandbanks out to sea and deposited on the shore. During a severe storm in October of the same year a substantial amount of the deposited material on the upper part of the beach was washed out past low tide level, leading to questions in the House of Commons. The beach has been topped up several times since then, giving the town a broad beach of sand and shingle.

The town's publicity website states: For many, the main attraction in Seaford is the beach. This has an obvious attraction in the summer, when the sea reaches temperatures up to 20° Celsius (68 °F).

Seaford Beach with Seaford Head in the background.

In 1620 and 1624, the sheriff and jurat of Seaford was William Levett, of an Anglo-Norman family long seated in Sussex. William Levett of Seaford owned the Bunces and Stonehouse manors in Warbleton, probably inheriting them from his father John Levett, who died in 1607. Levett sold the estates in 1628 and died in 1635, his will being filed in Hastings.

The Levett family intermarried with other Sussex families, including the Gildredges, the Eversfields, the Popes, the Ashburnhams, the Adams, and the Chaloners. A seal with his arms belonging to John de Livet, Lord of Firle, was found at Eastbourne in 1851.

Two local half-hourly circular bus services, the 119 and 120, are provided by Cuckmere Buses (Monday-Friday) and Compass Bus on Saturdays, who also run bus 126 from Seaford via Alfriston to Eastbourne.

Brighton & Hove operate two frequent bus services, the 12 and 12A (up to every 10 minutes), routed along the A259 south coast road through Seaford (the 12A goes via the Chyngton Estate on the east side of Seaford) which take passengers to Brighton or Eastbourne which both have extensive onward bus services.

Seaford station is the terminus of the line from Brighton via Lewes and Newhaven. The local train services are operated by Southern.

Main page: List of places of worship in Lewes (district) 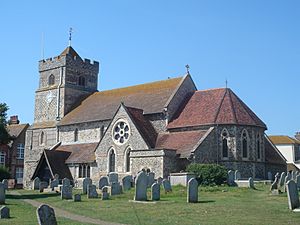 St Leonard's Church, in the town centre, has 11th-century origins.

Parts of the nave, aisles and clerestory of the Church of England parish church of St Leonard are Norman work from the 11th century. The north and south arcades and most of the clerestory windows are Early English Gothic. The tower is 14th century and its upper part is Perpendicular Gothic. The transepts and polygonal apse are Gothic Revival additions designed by John Billing and built in 1861–82. There is some modern stained glass by the Cox & Barnard firm of Hove. The church is a Grade I listed building. St Luke's Church, opened in 1959 and built of flint and brick, serves the Chyngton and Sutton suburbs of the town. It has been attributed to architect John Leopold Denman.

The Roman Catholic Church of St Thomas More was built in 1935 to replace a chapel in the grounds of Bishop of Southwark Francis Bourne's home nearby. James O'Hanlon Hughes and Geoffrey Welch designed the flint and render building, which was extended in 1969 using artificial stone.

W.F. Poulton designed a Gothic Revival chapel for Congregationalists in 1877. The flint building has a distinctive corner turret. It is now a United Reformed church with the name Cross Way Clinton Centre, and has links with the town's Methodist church, now called Cross Way Church. This was built in the Gothic Revival style of red brick in 1894. A town-centre Baptist chapel was demolished in 1973 and replaced by a new brown-brick circular church on the road to East Blatchington. Elsewhere in the town, there is a Jehovah's Witnesses Kingdom Hall, a Spiritualist church and an Evangelical church (the Seaford Community Church in Vale Road). 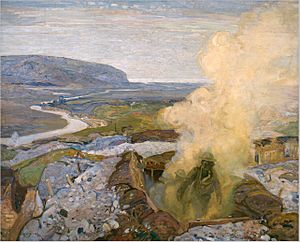 This painting by F.H. Varley depicts a WWI training exercise in Seaford. Soldiers emerge from a gas hut wearing respirators.

The Romans are known to have had a camp in Seaford. From 1794 coastal defence barracks were established at East Blatchington. In 1806–1808 a Martello Tower was built at the eastern end of Seaford Bay. It is the most westerly of the towers, numbered tower 74.

During the First and Second World Wars there were large military camps in the town. In the First World War the camps were built to house 22nd Division, Kitchener's Third New Army. The south camp nearly encircled Seaford ladies college. In December 1914 there was a strike by a mainly Welsh regiment over the remoteness of the accommodation and mud. In 1919 two thousand Canadians rioted after one of them was beaten by a camp picket for walking with his hands in his pockets.

Seaford has seven Victoria Cross holders associated with the town:

Seaford Cricket Club have played at the Salts Recreation Ground since 1946, though the origins of cricket in Seaford go back to the 18th century. The latest augmentation of facilities was in 2010, when the pavilion was extended. Seaford Rugby Football Club, affiliated to the Sussex County Rugby Football Union, play at the same venue, which has the distinction of being below sea-level.

The town has two golf courses, Seaford Golf Club, a downland course at Firle Road, and Seaford Head Golf Course, from which the coastline and the South Downs can be seen.

Seaford has at least two bowling clubs. They include Seaford Bowling Club, which is a private club at Blatchington Road, dating back to 1912, and The Crouch Bowling Club in Crouch Gardens, East Street.

Downs Leisure Centre operates 'The Wave' in Seaford. The Wave is a leisure centre offering a range of sports and pastimes, including badminton, indoor bowls, children's disco dancing, line-dancing and fitness classes. It should not be confused with WAVES, which is a Seaford-based charity supporting families in difficulties.

Swimming facilities are provided for the town at Seaford Head Swimming Pool, which is also run by Wave Leisure.

Towards the western end of Seaford Bay lies Newhaven and Seaford Sailing Club. Founded in 1952 by a group of sailing enthusiasts, the club now has two sites – racing off Seaford Beach and sailing at Piddinghoe Lake near Newhaven where the RYA accredited Sailing School is located.

The area around Seaford, such as up the Cuckmere Valley and along the South Downs Way, offers many walking routes.

Between the late 19th century and the 1950s, Seaford was renowned as a "school town". The many preparatory schools and other independent schools were the main employers in the town. In the 1960s, Sutton Avenue had a road sign warning "7 schools in next mile". Sunday mornings in term-time were marked by "crocodiles" of schoolchildren from each of the preparatory schools walking to church for the special schools' service.

Most of these independent schools, such as Ladycross School and St Peter's School were closed and the land used for new housing estates in the last decades of the 20th century. The last girls' school, Micklefield, closed in 1994.

Although it has many primary schools (Chyngton, Cradle Hill, Annecy, Seaford County Primary), from the nursery to the "sixth year" of education, the town of Seaford has only one state-run secondary school, Seaford Head School, which in 2009 closed its sixth form, but re-opened it in 2014. Seaford was also home to an independent school, Newlands Preparatory and Manor, which included a specialist unit for pupils with specific learning difficulties. However, the school closed for good in July 2014. Its previous site is currently being redeveloped into a housing estate.

The town is also home to a special needs boarding school called Bowden House which is run by Tower Hamlets Council.

All content from Kiddle encyclopedia articles (including the article images and facts) can be freely used under Attribution-ShareAlike license, unless stated otherwise. Cite this article:
Seaford, East Sussex Facts for Kids. Kiddle Encyclopedia.