Cuckmere Valley is a civil parish in the Wealden District of East Sussex, England. As its name suggests, the parish consists of a number of small settlements in the lower reaches of the River Cuckmere.

There are three villages in the Cuckmere Valley: Litlington, Lullington and Westdean. Archaeological remains nearer the coast at Exceat suggest a further settlement there in former times.

The name is Saxon, and probably indicates Litl's homestead. The twelfth- century church is dedicated to St Michael the Archangel.

Maria Fitzherbert (1756–1837), mistress of George IV, lived at Clapham House in the village.

In 1924 a chalk figure of a horse was cut into the downs to the west of the village, replacing one cut in the 19th century. The village inn is the Plough and Harrow.

Lullington is the most northerly of the three, about 10 miles (16 km) southeast of Lewes. It lies on a shoulder of the South Downs at the point where the River Cuckmere cuts through the downs, on the opposite bank of the river to Alfriston. A medieval village, Lullington Court, was abandoned after the Black Death in the 14th century; its site was to the east of the present Lullington. The church, dedicated to the Good Shepherd, is believed to be the smallest in England, having been rebuilt using only the original chancel after a fire had destroyed the remainder of the building. Services are held only in the summer months, as the building has no electricity.

Exceat (pronounced ex-seat) was an ancient village. The A259 goes by it just east of the River Cuckmere. The name may have come from æc-sceat, an oak grove, or from the Old English for "the place of the Aese", early kings of Kent whilst another etymology is possible from Brittonic wysg meaning water or river (or possibly "esgair meaning ridge) and ceat meaning woods, hence "Wooded River" or "Wooded Ridge". After the Norman conquest, the village was given to Robert, Count of Mortain, half brother of William the Conqueror. Both Exceat and the land were given later to Grestein Priory in Wilmington.

Until the 14th century, Exceat was an important village with its own church. The village suffered French raids; it suffered many fatalities during the Black Death, as was effectively abandoned by the 15th century.

The main features are the Visitors Centre for the nearby Seven Sisters and the Cuckmere Inn Public House across Exceat Bridge over the Cuckmere. 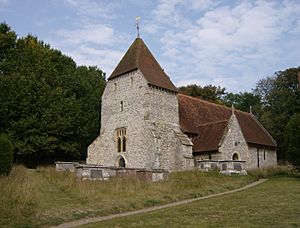 West Dean (or Westdean) is located on the edge of Friston Forest. Its church is dedicated to All Saints.

The National Trust owns land on the western side of the river south of the A259.

In addition, there are three Sites of Special Scientific Interest within the parish; Seaford to Beachy Head, Wilmington Downs and Lullington Heath. Seaford to Beachy Head is a large site of biological and geological importance. The area contains a wide variety of habitats based on the chalk bedrock, which hosts a wide range of flora and fauna, including some nationally rare species. Wilmington Downs is another area of biological interest; its chalk grassland is habitat for several rare species. Lullington Heath is also of biological interest due to its chalk heath and grassland habitats.

All content from Kiddle encyclopedia articles (including the article images and facts) can be freely used under Attribution-ShareAlike license, unless stated otherwise. Cite this article:
Cuckmere Valley Facts for Kids. Kiddle Encyclopedia.