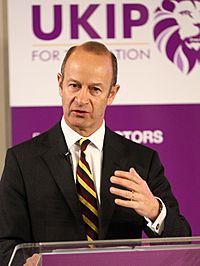 The 2017 UK Independence Party leadership election was held on 29 September 2017. UKIP members voted for who they want to lead the party. Henry Bolton won the election after receiving 30% of the vote.

The election was called for after the party's poor performance in the 2017 general election.

Nigel Farage decided not to run for the UKIP leadership position.

All content from Kiddle encyclopedia articles (including the article images and facts) can be freely used under Attribution-ShareAlike license, unless stated otherwise. Cite this article:
2017 UK Independence Party leadership election Facts for Kids. Kiddle Encyclopedia.