Tadley is a town and civil parish in the English county of Hampshire.

During the 1950s and 1960s, the Atomic Weapons Research Establishment (AWRE), now known as AWE, became the area's largest employer, and a large number of houses were built during this period to accommodate AWRE workers. Though the establishment was located in the parish of Aldermaston, most of these houses were built in Tadley. 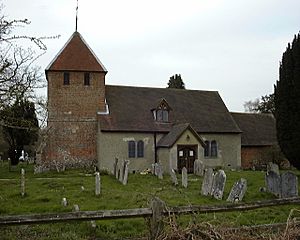 The origin of the name is uncertain. In old maps and books Tadley can be found spelled as Taddanleage, Tederlei, Titherley, Tudurley, Tadel and Taddeley. As with many other rural British communities, it is assumed that the village began as a clearing in the dense forest which at one time covered the greater part of England. In Old English, Tadde means 'Toad' or 'Frog' and ley being 'a clearing in the woods', so it possibly means "a clearing in the woods with frogs". Most sources, however, say that the name means "woodland clearing of a man called Tada".

In 909, Edward the Elder granted the 'Manor of Overton' to Frithstan, Bishop of Winchester. In the confirmation of this a wood at Tadley is mentioned. The village is mentioned frequently in documents relating to the grant. There was an independent estate in the parish called the 'Manor of Tadley' but later was known as the 'Manor of Withford or Wyford'. In 1166 this property was held by William Hotot. He was succeeded by his son, Robert Hotot in 1205. The first reference to a church at Tadley is in 1286 when Andrew Hotot is recorded as owning the Manor and Church. It could be assumed that a settlement and therefore a church existed at an earlier date in view of the documented references to owners of land at Tadley from 909.

Tadley lies next to the northern border of Hampshire, where it meets Berkshire. 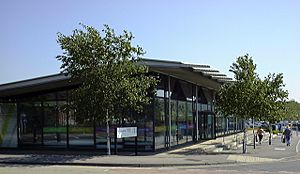 Hampshire County Council built a new library for Tadley in 1994. It was opened on 12 October 1994 by Dame Mary Fagan, the Lord Lieutenant of Hampshire.

A local legend dating from the late 19th century claims that there were treacle mines located in the village, and until well into the 20th century the locals were referred to as "Tadley Treacle Miners". Tadley holds an annual "Treacle Fair" in honour of this legend in early June. It is organised by the Loddon Valley Lions Club, a member of Lions Club International.

The main road through the town is the A340 road, which begins in Basingstoke 6 miles (10 km) to the south and ends in Pangbourne in Berkshire, 10 miles (16 km) north of Tadley.

Tadley is served by Stagecoach in Hampshire with a regular service to Basingstoke. Newbury Buses and Reading Buses provide a less frequent service to Newbury and Reading.

All content from Kiddle encyclopedia articles (including the article images and facts) can be freely used under Attribution-ShareAlike license, unless stated otherwise. Cite this article:
Tadley Facts for Kids. Kiddle Encyclopedia.