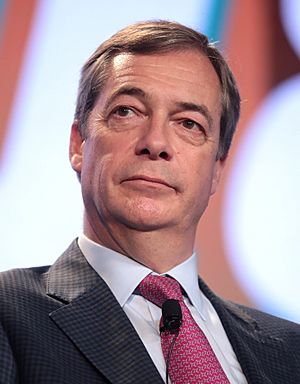 The Brexit Party is a Eurosceptic political party in the United Kingdom (UK) made up of politicians who support Brexit. Created in 2019, it is led by Nigel Farage. The party has four Welsh Assembly Members.

Many of its members were formerly of the UK Independence Party (UKIP), with Farage having led UKIP in 2006–09 and 2010–16, as well as from the Conservative Party.

All content from Kiddle encyclopedia articles (including the article images and facts) can be freely used under Attribution-ShareAlike license, unless stated otherwise. Cite this article:
Brexit Party Facts for Kids. Kiddle Encyclopedia.