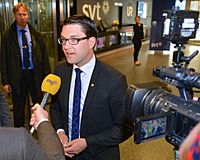 The Sweden Democrats (Swedish: Sverigedemokraterna, SD) is a political party in Sweden.

Other political parties in Sweden refuse to cooperate with the SD.

The Sweden Democrats mainly believe in social conservatism and nationalism. They believe that the current immigration policies in Sweden have failed. They also to make it harder for people to become citizens. According to the SD, a person who wants to become a citizen should: live in Sweden for 10 years, show that they are not criminals, be fluent in Swedish and know Swedish history.

The SD wants to ban abortion after 12 weeks unless the mother's life is in danger. They want a restrictive policy towards drugs and alcohol. They are Eurosceptic, meaning they are critical of the European Union. They awknowledge that LGBT people do not chose their sexuality, and believe that discrimination towards them should be illegal. The SD wants to bring back the conscription (meaning the government forces people to join the armed forces). They are supportive of nuclear power. They are against the death penalty.

All content from Kiddle encyclopedia articles (including the article images and facts) can be freely used under Attribution-ShareAlike license, unless stated otherwise. Cite this article:
Sweden Democrats Facts for Kids. Kiddle Encyclopedia.