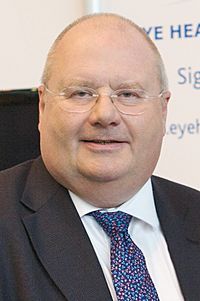 Eric Pickles was the British Secretary of State for Communities and Local Government.

Eric Jack Pickles (born 20 April 1952 in Keighley, West Riding of Yorkshire, England) is a British politician and was Secretary of State for Communities and Local Government in the Conservative-Liberal Democrat coalition government. He is the Conservative Party Member of Parliament (MP) for the constituency of Brentwood and Ongar in the House of Commons of the United Kingdom.

He was first elected in the 1992 general election and entered the Shadow Cabinet in 2007. He was the Chairman of the Conservative Party from January 2009 to May 2010, when he was replaced by Sayeeda Warsi, Baroness Warsi and was appointed the Secretary of State for Communities and Local Government instead. Pickles is standing down at the 2017 general election.

All content from Kiddle encyclopedia articles (including the article images and facts) can be freely used under Attribution-ShareAlike license, unless stated otherwise. Cite this article:
Eric Pickles Facts for Kids. Kiddle Encyclopedia.