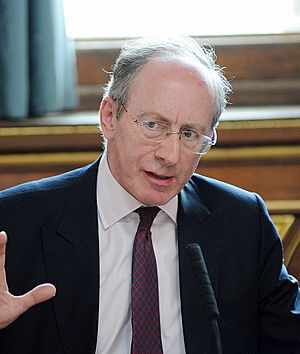 Sir Malcolm Leslie Rifkind (born 21 June 1946) is a British Conservative Party politician. He hold cabinet positions in the governments of Margaret Thatcher and John Major. He was the Chairman for the Intelligence and Security Committee and the Member of Parliament (MP) for the constituency of Kensington.

Malcolm Rifkind was born in Edinburgh into a Jewish family from Lithuania. He first became a Conservative MP at the February 1974 General Election for the constituency of Edinburgh Pentlands. He was first made a cabinet minister in 1979 and served constantly through 18 years of Conservative government.

All content from Kiddle encyclopedia articles (including the article images and facts) can be freely used under Attribution-ShareAlike license, unless stated otherwise. Cite this article:
Malcolm Rifkind Facts for Kids. Kiddle Encyclopedia.