He shared the 1962 Nobel Prize in Chemistry with Max Perutz. Their group in the Cavendish Laboratory was the first to determine the structure of proteins, using X-ray crystallography. He was also a Fellow (teacher) at Peterhouse College in Cambridge.

In what became the MRC Laboratory of Molecular Biology, Kendrew determined the structure of the protein myoglobin, which stores oxygen in muscle cells.

He spent the early months of World War II doing research on radar. In 1940 he became engaged in operational research at the Royal Air Force headquarters, holding the honorary rank of Wing Commander R.A.F. 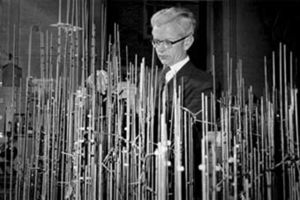 John Kendrew with model of myoglobin in progress. Copyright by the Laboratory of Molecular Biology in Cambridge, England.

All content from Kiddle encyclopedia articles (including the article images and facts) can be freely used under Attribution-ShareAlike license, unless stated otherwise. Cite this article:
John Kendrew Facts for Kids. Kiddle Encyclopedia.