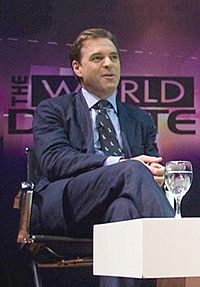 Niall Campbell Ferguson (/ˈniːl/; born 18 April 1964) is a Scottish-American historian. He was born in Glasgow. He is the Milbank Family Senior Fellow at the Hoover Institution. He was a professor at Harvard University and New York University.

Ferguson writes and lectures on international history, economic and financial history and British and American imperialism. He is a contributing editor for Bloomberg Television and a columnist for Newsweek.

All content from Kiddle encyclopedia articles (including the article images and facts) can be freely used under Attribution-ShareAlike license, unless stated otherwise. Cite this article:
Niall Ferguson Facts for Kids. Kiddle Encyclopedia.