Christ's College is a constituent college of the University of Cambridge. The college includes the Master, the Fellows of the College, and about 450 undergraduate and 170 graduate students. The college was founded by William Byngham in 1437 as God's House. In 1505, the college was granted a new royal charter, was given a substantial endowment by Lady Margaret Beaufort, and changed its name to Christ's College, becoming the twelfth of the Cambridge colleges to be founded in its current form. The college is renowned for educating some of Cambridge's most famous alumni, including Charles Darwin and John Milton.

Within Cambridge, Christ's has a reputation for strong academic performance and tutorial support. It has averaged 1st place on the Tompkins Table from 1980–2006 and third place from 2006 to 2013.

As of 2015, it had an endowment of £157 million, making it one of the wealthier colleges in Cambridge. 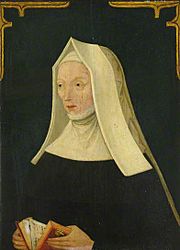 Christ's College was founded by William Byngham in 1437 as God's House, on land which was soon after sold to enable the enlargement of King's College. Byngham obtained the first royal licence for God's House in July 1439. The college was founded to provide for the lack of grammar-school masters in England at the time, and the college has been described as "the first secondary-school training college on record".

Christ's College is one of only 5 colleges in Oxford or Cambridge to have its own swimming pool. It is fed by water from Hobson's Conduit. Recently refurbished, it is now known as the 'Malcolm Bowie Bathing Pool', and is thought to be the oldest outdoor swimming pool in the UK, dating from the mid 17th century.

All content from Kiddle encyclopedia articles (including the article images and facts) can be freely used under Attribution-ShareAlike license, unless stated otherwise. Cite this article:
Christ's College, Cambridge Facts for Kids. Kiddle Encyclopedia.