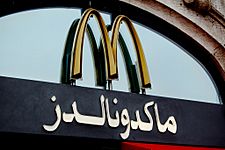 A sign for a McDonald's restaurant in Arabic. Globalization brings many companies to different parts of the world.

Globalization is the way that local or national ways of doing things become global, that is, done together around the world. It is about economics or trade, technology, politics, and culture. People feel differently about globalization: some think it helps everyone while others think it hurts some people.

It describes the way countries and people of the world interact and integrate. Globalization has many sides and can be economic, political and/or cultural.

Political globalization is how institutions and countries can influence the whole world. The United Nations are an example of globalization because most countries of the world are members of its General Assembly. This international organization can make countries follow rules and apply economic sanctions to a country that doesn't. This means the countries in the U.N will punish them by not talking or trading with them so they don't benefit from globalization.

Cultural globalization is how culture is becoming homogeneous, which means that people from all over the world act in similar way. For example, many people around the world write with the Latin alphabet, wear T-shirts and jeans and watch Hollywood movies and other media.

Some people, like Noam Chomsky, do not like globalization because they feel it only helps rich people get richer by making poor people poorer. Offshore outsourcing, where companies hire workers in cheaper countries, is often a part of globalization. This sometimes means that some people lose their jobs. Joseph Stiglitz said that international groups like the World Bank and the International Monetary Fund (IMF) have made it harder for poorer nations to get richer. Globalization also means that problems from other countries will affect your country. For example the Global Financial Crisis of 2008 started in the United States but ended up affecting the entire world.

Many countries also dislike it when international organizations tell them what to do. However they have to do so because of sanctions. Many people also criticize the fact that globalization means that fewer people are deciding what happens to everyone when they don't always represent the people they're acting for.

Some critics of globalization also feel that it leads to global brands, like Coca-Cola and McDonald's, taking over smaller, local shops and businesses. They criticize the fact that powerful countries have bigger influence on world culture than others. For example, the United States is the biggest cultural exporter, which means that countries around the world are becoming like the United States. However, this hurts local cultures. Jean Baudrillard believes that globalization hurts local cultures and is the cause of most terrorism. He also believes that most supporters of globalization just want to stay in power.

Many believe that globalization helps out poorer nations by bringing them business. A report by the World Bank said that poverty in India and Indonesia was cut in half because of globalization. The report also said that people in poorer nations are living longer and better because they were making more money.

All content from Kiddle encyclopedia articles (including the article images and facts) can be freely used under Attribution-ShareAlike license, unless stated otherwise. Cite this article:
Globalization Facts for Kids. Kiddle Encyclopedia.