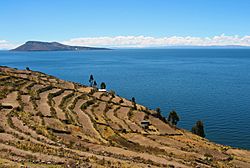 Inca-era terraces on Taquile are used to grow traditional Andean food, such as potatoes, with wheat from Europe.

The Columbian Exchange, sometimes called the Grand Exchange was the exchange of goods and ideas from Europe, Africa, and Asia and goods and ideas from the Americas. It also spread different diseases. It started in 1492 when Christopher Columbus arrived in the West Indies (North America).

This exchange of plants and animals changed European, American, African, and Asian ways of life. Foods that had never been seen before by people became a major part of what they ate. For example, before 1492, no potatoes were grown outside of South America. By the 1840s, Ireland was so dependent on the potato that a diseased crop led to the devastating Irish Potato Famine. The first European import to the Americas, the horse, changed the lives of many Native American tribes on the Great Plains, letting them to change to a nomadic lifestyle based on hunting bison on horseback. Italy became famous for its Tomato sauce, made from New World tomatoes, while coffee from Africa and sugarcane from Asia became the main crops of very large Latin American plantations. Also the chili and paprika from South America was introduced in India by the Portuguese and it is today an important part of Indian cuisine.

Before the Columbian Exchange, there were no oranges in Florida, no bananas in Ecuador, no paprika in Hungary, no zucchini in Italy, no pineapples in Hawaii, no rubber trees in Africa, no cattle in Texas, no chili peppers in Thailand and India, no cigarettes in France and no chocolate in Switzerland. Even the dandelion was brought to America by Europeans for use as an herb.

Before there was regular communication between the two hemispheres, the different types of domesticated animals and diseases were more numerous in the Old World than in the New. This partly led to the horrible effects of Old World diseases on Native American tribes. Smallpox probably caused in the highest death toll for Native Americans.

Barely any civilization on earth stayed the same by this global ecological exchange.

All content from Kiddle encyclopedia articles (including the article images and facts) can be freely used under Attribution-ShareAlike license, unless stated otherwise. Cite this article:
Columbian Exchange Facts for Kids. Kiddle Encyclopedia.