"Sleeping sickness" is also another name for Narcolepsy. 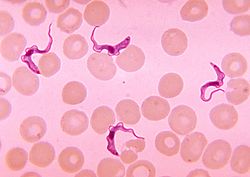 Trypanosomes in a blood smear

Sleeping sickness, or African trypanosomiasis, is an infectious disease. It is caused by parasites from the species Trypanosoma brucei.

People get African trypanosomiasis from the tsetse fly. Because of this, it is most common in certain areas of Africa, especially Sub-Saharan Africa, where the tsetse fly lives. Researchers say that about 70 million people, in 36 countries, are at a high risk for getting sleeping sickness. As of 2010, sleeping sickness had caused around 9,000 deaths per year (compared to 34,000 in 1990).

In 2013, about 30,000 people had African trypanosomiasis. Also, about 7,000 more people were getting the disease every year. More than 80% of these people in the Democratic Republic of the Congo.

All content from Kiddle encyclopedia articles (including the article images and facts) can be freely used under Attribution-ShareAlike license, unless stated otherwise. Cite this article:
Sleeping sickness Facts for Kids. Kiddle Encyclopedia.