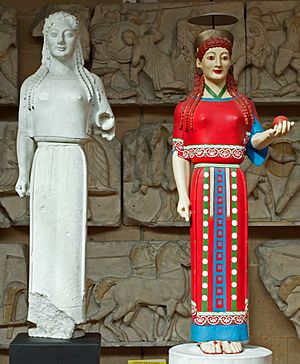 Peplos Kore, cast and reconstruction, in the Museum of Classical Archaeology

The museum is one of the few surviving collections of plaster casts of ancient Greek and Roman sculpture in the world. The collection consists of several hundred casts, including casts of some of the most famous surviving ancient Greek and Roman sculptures. Noteworthy casts include those of the Laocoön and His Sons, the Farnese Hercules, the Barberini Faun and Charioteer of Delphi.

The Peplos Kore is perhaps the best known exhibit in the museum. It is a plaster cast of an ancient Greek statue of a young woman painted brightly as the original would have been, which was set up on the Acropolis of Athens, around 530 BCE. In 1975, the museum attempted to replicate the sculpture’s original appearance by painting a cast of the figure. The replica was then displayed next to a second, unpainted cast as a challenge to the erroneous equation of ancient Greek sculpture with pure white marble.

The museum also holds a large collection of sherds and epigraphic squeezes.

The museum is one of eight which make up the University of Cambridge Museums consortium.

Its former home on Little St Mary's Lane was designed by Basil Champneys in 1883; it is now part of the buildings of Peterhouse.

All content from Kiddle encyclopedia articles (including the article images and facts) can be freely used under Attribution-ShareAlike license, unless stated otherwise. Cite this article:
Museum of Classical Archaeology, Cambridge Facts for Kids. Kiddle Encyclopedia.