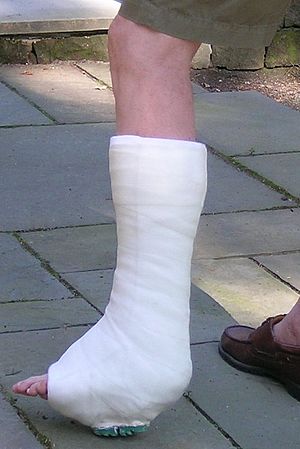 Orthopedic casts are casts made of plaster that cover a limb to hold a broken bone in place while it heals. Doctors use casts of fiberglass currently. In early times, people often used splints to help heal broken bones. It is thought that orthopedic casts came about from splints.

All content from Kiddle encyclopedia articles (including the article images and facts) can be freely used under Attribution-ShareAlike license, unless stated otherwise. Cite this article:
Orthopedic cast Facts for Kids. Kiddle Encyclopedia.