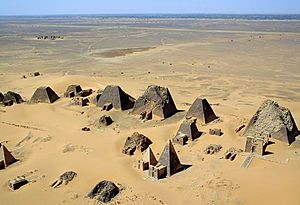 Meroë is a site in Sudan. There are many pyramids there. Most of them are in ruins. The city tells of the glory of past kings, which are buried in the pyramids.

Meroë (Meroitic: Medewi or Bedewi) is the name of an ancient city. What remains of the city is on the east bank of the Nile about 6 km north-east of the Kabushiya station near Shendi, Sudan. It lies about 200 km north-east of Khartoum. There are a few villages nearby. They are called Bagrawiyah.

Meroë was the capital of the Kingdom of Kush for several centuries. The Kushitic Kingdom of Meroë gave its name to the "Island of Meroë", which was the modern region of Butana, a region bounded by the Nile (from the Atbarah River to Khartoum), the Atbarah, Ethiopia, and the Blue Nile. The city of Meroë was on the edge of Butana and there were two other Meroitic cities in Butana, Musawwarat es-Sufra and Naqa. [1]

The site of the city of Meroë is marked by over two hundred pyramids in three groups. Of many of these pyramids, there are only ruins left.

All content from Kiddle encyclopedia articles (including the article images and facts) can be freely used under Attribution-ShareAlike license, unless stated otherwise. Cite this article:
Meroë Facts for Kids. Kiddle Encyclopedia.