The Nile at Aswan, seen from Elephantine Island 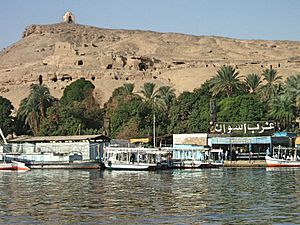 Tourism on the Nile

Aswan is one of the driest places in the world where people actually live; as of early 2001, the last rain there was 6 years earlier. As of October 13, 2007, the last rainfall was a thunderstorm on May 13, 2006. In Nubian settlements, the people often do not put a roof over all of the rooms in their houses.

All content from Kiddle encyclopedia articles (including the article images and facts) can be freely used under Attribution-ShareAlike license, unless stated otherwise. Cite this article:
Aswan Facts for Kids. Kiddle Encyclopedia.