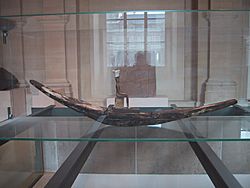 Anuket in the Louvre museum.

Anuket was the first ancient Egyptian goddess of the Nile river in areas like Elephantine Island, at the start of the Nile's journey through Egypt, and in nearby parts of Nubia. Her temple was built at the Island of Seheil.

Since the god Khnum and goddess Satis were thought to be the gods of the source of the Nile, Anuket was believed to be their daughter. The Egyptians believed that the two tributaries in her area of the Nile were her arms. Because tributaries move quickly, she became associated with fast-moving things, like arrows, and the gazelle.

In art, she was usually shown as a gazelle, or with a gazelle's head, and sometimes had a headdress of feathers.

When the Nile started its annual flood, the Festival of Anuket began. People threw coins, gold, jewelry, and precious gifts into the river, thanking Anuket for the life-giving water. The taboo that was held in several parts of Egypt of not eating fish, which were considered sacred, was lifted during this time.

All content from Kiddle encyclopedia articles (including the article images and facts) can be freely used under Attribution-ShareAlike license, unless stated otherwise. Cite this article:
Anuket Facts for Kids. Kiddle Encyclopedia.