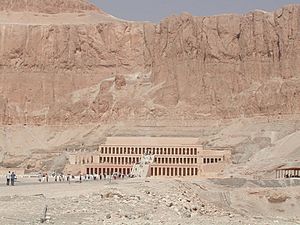 The temple at Deir el-Bahri

Egyptian temples were buildings for the official worship of the gods in ancient Egypt. These temples were seen as houses for the gods. Sometimes they were specially for the pharaohs (kings). Within these temples the Egyptians performed a variety of rituals of the Egyptian religion. People would give offerings (gifts) to the gods. They would show the stories of the gods through festivals. These festivals would also help normal life to continue. The pharaohs were responsible for providing the temples and caring for the gods. This required a lot of labor and material for building and maintenance. It was necessary for the pharaohs to give this responsibility to priests. Most of the ordinary people did not take part in ceremonies and could not enter special parts of the temple. The temple was an important religious place for all classes of Egyptians. They went there to pray, give offerings, and seek guidance from the god dwelling within.

The most important part of the temple was the sanctuary. The sanctuary was the most secret and special place and usually had a statue of a god. In the early years of Egypt, about 3000 BCE, the temples were small. Priests and pharaohs added more rooms and the temples became bigger. The rooms would have a lot of decoration of the religion. By the time of the New Kingdom (c.1550-1070 BCE) the temples were huge buildings made of stone. The buildings were arranged in special ways for the religion. The temple would have halls, open areas, and very large entrance pillars. Some of these temples still exist today. Beyond the main temple was an outer wall. There would be other buildings inside the walls. 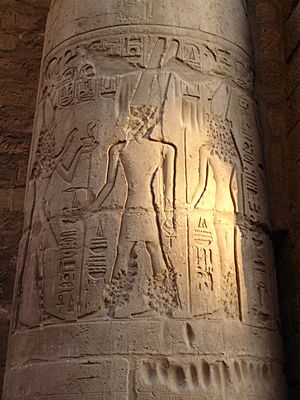 A large temple also had a lot of land and employed thousands of ordinary people to supply its needs. Temples were also economic centers. The priests who managed the temples had a lot of influence. They would sometimes oppose the king.

Temple-building continued in Egypt even when the nation declined and was ruled by the Roman Empire. Christianity brought more pressure on Egyptian religion. The last temple was closed in 550 CE. For hundreds of years, the ancient buildings were damaged and neglected. In the early 19th century, many people in Europe became interested in ancient Egypt. The study of ancient Egypt became known as the science of Egyptology. Egyptologists continue to study the surviving temples and the remains of destroyed ones. They tell us a lot about ancient Egyptian society.

All content from Kiddle encyclopedia articles (including the article images and facts) can be freely used under Attribution-ShareAlike license, unless stated otherwise. Cite this article:
Egyptian temple Facts for Kids. Kiddle Encyclopedia.