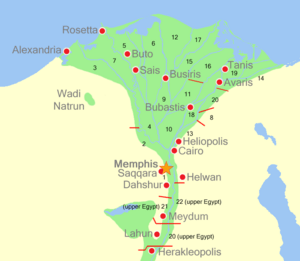 Map of the nomes of lower Egypt 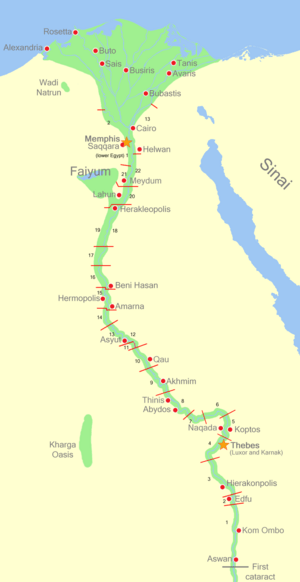 Map of the nomes of upper Egypt

A Nome (from Greek: Νομός, “district”) was an administrative part of ancient Egypt. Nome is a Greek name, used late in Egypt's history; the Egyptian name was "sepat".

The division of ancient Egypt into nomes happened before 3100 BC. These nomes began as autonomous city-states, but later began to join together. According to ancient tradition, the ruler Menes finally joined all the nomes into a single kingdom.

The nomes remain in place for more than 3,000 years.

Lower Egypt, from the Old Kingdom capital Memphis to the Mediterranean Sea, had 20 nomes. The first was based around Memphis, Saqqara, and Giza, in the area occupied by modern-day Cairo. The nomes were numbered in a more or less orderly fashion south to north through the Nile delta. The numbering started in the west, and continued with the higher numbers in the east. Alexandria was in the Third Nome; Bubastis was in the Eighteenth.

Upper Egypt was divided into 22 nomes. The first of these was centered around Elephantine close to Egypt's border with Nubia at the First Cataract – the area of modern-day Aswan. From there the numbering progressed downriver in an orderly fashion along the narrow fertile strip of land that was the Nile valley. Waset (ancient Thebes or contemporary Luxor) was in the Fourth Nome, Amarna in the Fourteenth, and Meidum in the Twenty-First.

All content from Kiddle encyclopedia articles (including the article images and facts) can be freely used under Attribution-ShareAlike license, unless stated otherwise. Cite this article:
Nome (Egypt) Facts for Kids. Kiddle Encyclopedia.