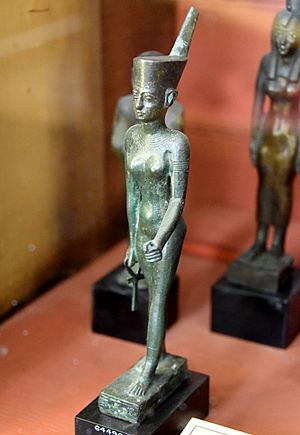 Bronze statuette of Neith. She wears the Red Crown of Lower Egypt. The hieroglyphic inscriptions, partially erased, mention the name of Padihor. From Egypt. Late Period. The British Museum, London

Neith was one of the earliest goddesses of ancient Egypt. She was the patroness of the city Sais in the River Nile Delta. Several Egyptian queens of the first Dynasty were named after her. The people of lower Egypt prayed to her statues when they were sick or to keep them safe from harm. Every year the people held a great festival in her honor, called the Feast of Lamps, because at night, they burned lots of lights in the open air during the celebration.

Neith had worshippers all over Egypt. In the Old Kingdom of Egypt, she was an important deity in Memphis. But, she lost some of her importance during the Middle Kingdom and early New Kingdom. But, in the 19th dynasty, she became more popular again.

Neith was the goddess of war and hunting. It was her responsibility to help settle wars and disputes between the gods and the Egyptians. The Egyptian warriors believed they could not win a war without praying to her.

All content from Kiddle encyclopedia articles (including the article images and facts) can be freely used under Attribution-ShareAlike license, unless stated otherwise. Cite this article:
Neith Facts for Kids. Kiddle Encyclopedia.