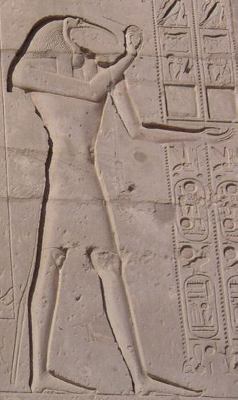 Thoth was considered the heart and tongue of Ra. He was also the one who translated Ra's will into speech.

Thoth played very important roles in Egyptian myths. He was said to have resurrected Osiris after he was slain by Seth and also later resurrected his son, Horus. He was also credited for creating 365 days instead of 360. One myth explains how Ra bans Nut from having children on any day of the year. Thoth then goes to the moon god, Khonsu, and gambles five days out of him, therefore giving five days when Nut can have children. He also was sometimes said to take the place of the Primeval Goose and be the creator of the world and all other gods.

Thoth had one direct relation to Ma'at that people know of, although some myths say he was the son of Ra. His feminine counterpart was a goddess named Seshat. She was also sometimes credited to be the inventor of hieroglyphs, while Thoth taught them. She was also said to be Thoth’s wife or daughter.

Ma'at also played a big role next to Thoth. He was there at the weighing of the heart, noting, while Ma’at weighed the heart. They both stood on either side of Ra’s boat and also he was sometimes said to be Ma’at’s husband. Ma'at was the goddess of law, order, truth, and justice.

Thoth was a unique god. He is said to have two forms: an Ibis headed human and a squatting dog headed baboon. He held a stylus and a pallet, and sometimes the symbol of life, called the Ankh.

Thoth had many titles and a lot of roles. He was often called “Three times Great, Great”. He was mediator, messenger, scribe and teacher. Some of his titles included; ‘Scribe of Ma’at in the company of the gods’ ‘Lord of Ma’at’ ‘Lord of divine words’ ‘Judge of the two combatant gods’ ‘Three times great’ or ‘Thrice Great’ These numerous titles show that Thoth had a very significant importance to ancient Egyptian mythology. He had his high point of worship in the Old Kingdom.

Hermes and the Greeks

When the Greeks conquered Egypt, they related Thoth with Hermes, their messenger god. Thoth’s center city was Khemenu, (where he has his chief temple) which the Greeks renamed to Hermopolis; city of Hermes. Today, ancient temples and ruins worshiping Thoth are there and what used to be Khemenu is now el-Eshmunein.

All content from Kiddle encyclopedia articles (including the article images and facts) can be freely used under Attribution-ShareAlike license, unless stated otherwise. Cite this article:
Thoth Facts for Kids. Kiddle Encyclopedia.