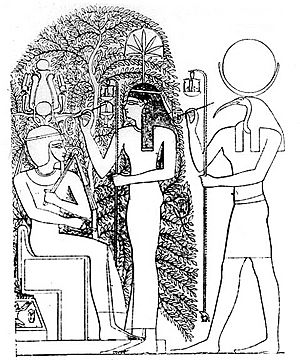 Seshat was the ancient Egyptian idea of knowledge, shown as a goddess. She became the goddess of writing, astronomy/astrology, architecture, and mathematics. When Thoth became the god of wisdom, Seshat was seen as his daughter, or sometimes, as his wife. In art, she was shown as a woman with a stylised papyrus plant above her head. This symbolised writing since the Egyptians wrote on a material that came from papyrus.

All content from Kiddle encyclopedia articles (including the article images and facts) can be freely used under Attribution-ShareAlike license, unless stated otherwise. Cite this article:
Seshat Facts for Kids. Kiddle Encyclopedia.