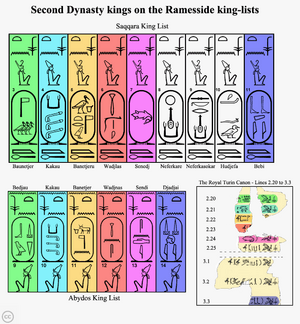 The Second Dynasty ruled ancient Egypt from c. 2890 to c. 2686 BC It is the second dynasty of the Early Dynastic Period of Egypt. During this time the seat of government was centred at Thinis. Very little is known about this period in ancient Egyptian history.

There is very little archaeological evidence of the time. But to compare the differences between the First and Third Dynasties shows that there must have important institutional and economic developments during the Second Dynasty.

The names of the next two or three rulers is unclear. We may have both the Horus-name or Nebty (meaning two ladies) name and their birth names for these rulers, however they may be entirely different individuals; or they may be legendary names. On the left are the rulers most Egyptologists place here; on the right are the names from Manetho's Aegyptica:

With the last ruler, we return to an agreement:

Manetho wrote that the capital was at Thinis, the same as during the First Dynasty. However, at least the first three kings were buried at Saqqara. This could mean the center of power had moved to Memphis. Beyond this, little can be said about the events during this period. The annual records on the Palermo Stone only survive for the end of the reign of Nebra and for parts of Nynetjer's. One important event possibly happened during the reign of Khasekhemwy: many Egyptologists read his name ("the Two Powers arise") as commemorating the union of the Upper and Lower Egypts.

All content from Kiddle encyclopedia articles (including the article images and facts) can be freely used under Attribution-ShareAlike license, unless stated otherwise. Cite this article:
Second Dynasty of Egypt Facts for Kids. Kiddle Encyclopedia.