The Hawksbill Sea Turtle (Eretmochelys imbricata) is an endangered species of turtle. It is mostly seen in shallow lagoons and coral reefs where the sea sponges it eats live. It is smaller than the Australian flatback turtle: it is usually a little more than two feet long. It usually weighs about 150 pounds. It has the most pointed beak among sea turtles, which is how it gets its name. The hawksbill gets food from inside coral reefs, eating sponges, shrimp, squid, and other invertebrates. The hawksbill pointy beak helps the turtle get food out of the tiny cracks and holes in which it searches.

Though they are sometimes seen in American waters, hawksbill turtles almost always nest in the warmer climates that run along the equator. Because people use the shell to make jewelry and other things, the hawksbill turtle is endangered. 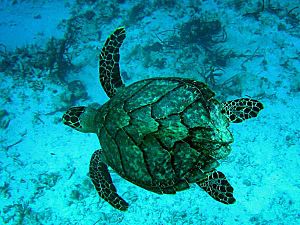 Carapace's serrated margin and overlapping scutes are evident in this individual 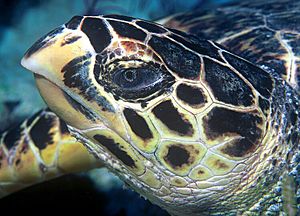 Close-up of the hawksbill's distinctive beak

Adult hawksbill sea turtles typically grow to 1 m (3 ft) in length, weighing around 80 kg (180 lb) on average. The heaviest hawksbill ever captured weighed 127 kg (280 lb). The turtle's shell, or carapace, has an amber background patterned with an irregular combination of light and dark streaks, with predominantly black and mottled-brown colors radiating to the sides.

Several characteristics of the hawksbill sea turtle distinguish it from other sea turtle species. Its elongated, tapered head ends in a beak-like mouth (from which its common name is derived), and its beak is more sharply pronounced and hooked than others. The hawksbill's forelimbs have two visible claws on each flipper.

One of the hawksbill's more easily distinguished characteristics is the pattern of thick scutes that make up its carapace. While its carapace has five central scutes and four pairs of lateral scutes like several members of its family, E. imbricata's posterior scutes overlap in such a way as to give the rear margin of its carapace a serrated look, similar to the edge of a saw or a steak knife. The turtle's carapace has been known to reach almost 1 m (3 ft) in length. The hawksbill appears to frequently employ its sturdy shell to insert its body into tight spaces in reefs.

Crawling with an alternating gait, hawksbill tracks left in the sand are asymmetrical. In contrast, the green sea turtle and the leatherback turtle have a more symmetrical gait.

Due to its consumption of venomous cnidarians, hawksbill sea turtle flesh can become toxic.

The hawksbill sea turtle has been shown to be biofluorescent and is the first reptile recorded with this characteristic. It is unknown if this is derived from the turtle's diet, which includes biofluorescent organisms like the hard coral Physogyra lichtensteini. Males have more intense pigmentation than females, and a behavioural role of these differences is speculated.

Adult hawksbill sea turtles are primarily found in tropical coral reefs. They are usually seen resting in caves and ledges in and around these reefs throughout the day. As a highly migratory species, they inhabit a wide range of habitats, from the open ocean to lagoons and even mangrove swamps in estuaries. Little is known about the habitat preferences of early life-stage E. imbricata; like other young sea turtles, they are assumed to be completely pelagic, remaining at sea until they mature. 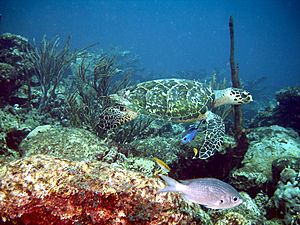 E. imbricata in a coral reef in Venezuela

While they are omnivorous, sea sponges are their principal food; they constitute 70–95% of the turtles' diets in the Caribbean. However, like many spongivores, they feed only on select species, ignoring many others. Caribbean populations feed primarily on the orders Astrophorida, Spirophorida, and Hadromerida in the class Demospongiae. Aside from sponges, hawksbills feed on algae, cnidarians, comb jellies and other jellyfish, and sea anemones. They also feed on the dangerous jellyfish-like hydrozoan, the Portuguese man o' war. Hawksbills close their unprotected eyes when they feed on these cnidarians. The man o' war's stinging cells cannot penetrate the turtles' armored heads.

Hawksbills are highly resilient and resistant to their prey. Some of the sponges they eat are highly toxic to other organisms. 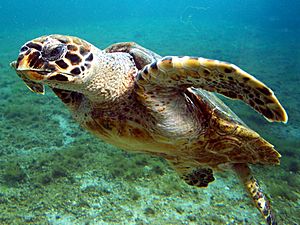 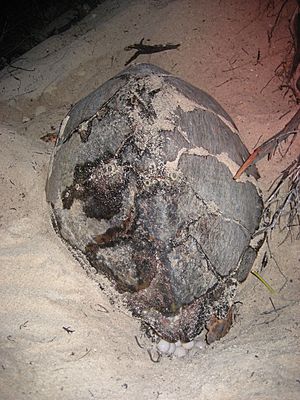 Not much is known about the life history of hawksbills. Their life history can be divided into three phases, namely the pelagic phase, from hatching to about 20 cm, the benthic phase, when the immature turtles recruit to foraging areas, and the reproductive phase, when they reach sexual maturity. The pelagic phase possibly lasts until the turtles reach around 20 cm in length in 1–3 years, reaching sexual maturity at around 40 cm (2–4 years). Hawksbills show a degree of fidelity after recruiting to the benthic phase, however movement to other similar habitats is possible. 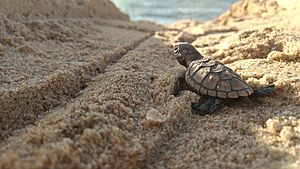 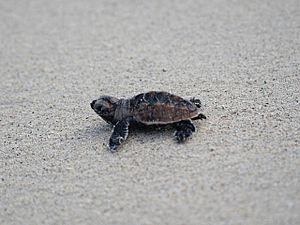 Hawksbills mate biannually in secluded lagoons off their nesting beaches in remote islands throughout their range. The most significant nesting beaches are in Mexico, the Seychelles, Indonesia, and Australia. Mating season for Atlantic hawksbills usually spans April to November. Indian Ocean populations, such as the Seychelles hawksbill population, mate from September to February. After mating, females drag their heavy bodies high onto the beach during the night. They clear an area of debris and dig a nesting hole using their rear flippers, then lay clutches of eggs and cover them with sand. Caribbean and Florida nests of E. imbricata normally contain around 140 eggs. After the hours-long process, the female returns to the sea. Their nests can be found throughout beaches in about 60 countries.

The baby turtles, usually weighing less than 24 g (0.85 oz) hatch at night after around two months. These newly emergent hatchlings are dark-colored, with heart-shaped carapaces measuring around 2.5 cm (0.98 in) long. They instinctively crawl into the sea, attracted by the reflection of the moon on the water (possibly disrupted by light sources such as street lamps and lights). While they emerge under the cover of darkness, baby turtles that do not reach the water by daybreak are preyed upon by shorebirds, shore crabs, and other predators.

Hawksbills evidently reach maturity after 20 years. Their lifespan is unknown. Like other sea turtles, hawksbills are solitary for most of their lives; they meet only to mate. They are highly migratory. Because of their tough carapaces, adults' only predators are sharks, estuarine crocodiles, octopuses, and some species of pelagic fish.

All content from Kiddle encyclopedia articles (including the article images and facts) can be freely used under Attribution-ShareAlike license, unless stated otherwise. Cite this article:
Hawksbill turtle Facts for Kids. Kiddle Encyclopedia.