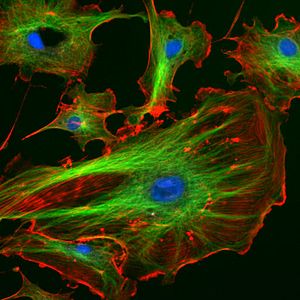 Fluorescence is the light given off by certain substances when it absorbs light or other electromagnetic radiation. First the substance absorbs the energy, then it emits light. When the light source is removed, the fluorescence stops occurring. It is a form of luminescence.

In most cases, the light given off has a longer wavelength and lower energy than the absorbed light.

One of the most surprising types of fluorescence is when a substance absorbs ultraviolet light that cannot be seen by the human eye, but gives off visible light.

Fluorescence is used in many fields such as mineralogy, gemology, chemical sensors (fluorescence spectroscopy), dyes, biological detectors, and fluorescent lights.

Fluorescence in the life sciences is a way of tracking biological molecules. A protein or other component can have a fluorescent dye attached to it, which allows a scientist to visually find the specific protein with a microscope.

All content from Kiddle encyclopedia articles (including the article images and facts) can be freely used under Attribution-ShareAlike license, unless stated otherwise. Cite this article:
Fluorescence Facts for Kids. Kiddle Encyclopedia.