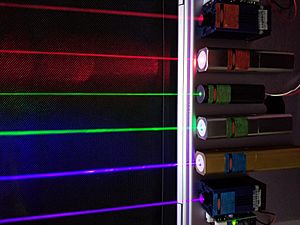 The visible spectrum (or sometimes called the optical spectrum) is the part of the electromagnetic spectrum that is visible to the human eye. Electromagnetic radiation in this range of wavelengths is called visible light or simply light.

A typical human eye will react to wavelengths in air from about 380 to 750 nm.

The familiar colors of the rainbow in the spectrum include all those colors that can be produced by visible light of a single wavelength only, the pure spectral or monochromatic colors.

But there are no clear boundaries between one color and the next.

Color display spectrum. The narrow red, green and blue bars show the relative mixture of the three primary colors used to produce the color directly above.

Color displays (e.g., computer monitors or televisions) mix red, green, and blue color to approximate the color spectrum. In the illustration, the narrow red, green and blue bars show the relative mixture of these three colors used to produce the color directly above.

All content from Kiddle encyclopedia articles (including the article images and facts) can be freely used under Attribution-ShareAlike license, unless stated otherwise. Cite this article:
Visible spectrum Facts for Kids. Kiddle Encyclopedia.