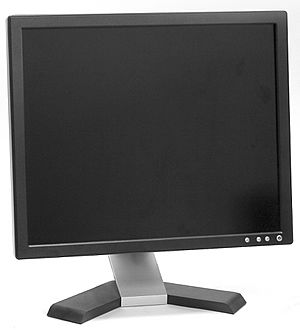 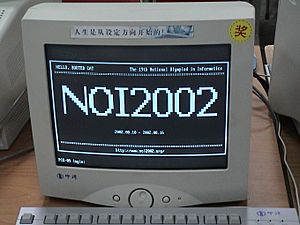 Early electronic computers were fitted with a panel of light bulbs where the state of each particular bulb would indicate the on/off state of a particular register bit inside the computer. This allowed the engineers operating the computer to monitor the internal state of the machine, so this panel of lights came to be known as the 'monitor'. As early monitors were only capable of displaying a very limited amount of information, and were very transient, they were rarely considered for program output. Instead, a line printer was the primary output device, while the monitor was limited to keeping track of the program's operation.

As technology developed engineers realized that the output of a CRT display was more flexible than a panel of light bulbs and eventually, by giving control of what was displayed to the program itself, the monitor itself became a powerful output device in its own right.

Computer monitors were formerly known as visual display units (VDU), but this term had mostly fallen out of use by the 1990s.

Multiple technologies have been used for computer monitors. Until the 21st century most used cathode ray tubes but they have largely been superseded by LCD monitors.

The first computer monitors used cathode ray tubes (CRTs). Prior to the advent of home computers in the late 1970s, it was common for a video display terminal (VDT) using a CRT to be physically integrated with a keyboard and other components of the system in a single large chassis. The display was monochrome and far less sharp and detailed than on a modern flat-panel monitor, necessitating the use of relatively large text and severely limiting the amount of information that could be displayed at one time. High-resolution CRT displays were developed for specialized military, industrial and scientific applications but they were far too costly for general use.

Some of the earliest home computers (such as the TRS-80 and Commodore PET) were limited to monochrome CRT displays, but color display capability was already a standard feature of the pioneering Apple II, introduced in 1977, and the specialty of the more graphically sophisticated Atari 800, introduced in 1979. Either computer could be connected to the antenna terminals of an ordinary color TV set or used with a purpose-made CRT color monitor for optimum resolution and color quality.

By the end of the 1980s color CRT monitors that could clearly display 1024 x 768 pixels were widely available and increasingly affordable. During the following decade maximum display resolutions gradually increased and prices continued to fall. CRT technology remained dominant in the PC monitor market into the new millennium partly because it was cheaper to produce and offered viewing angles close to 180 degrees. CRTs still offer some image quality advantages over LCDs but improvements to the latter have made them much less obvious. The dynamic range of early LCD panels was very poor, and although text and other motionless graphics were sharper than on a CRT, an LCD characteristic known as pixel lag caused moving graphics to appear noticeably smeared and blurry.

There are multiple technologies that have been used to implement liquid crystal displays (LCD). Throughout the 1990s, the primary use of LCD technology as computer monitors was in laptops where the lower power consumption, lighter weight, and smaller physical size of LCD's justified the higher price versus a CRT. Commonly, the same laptop would be offered with an assortment of display options at increasing price points: (active or passive) monochrome, passive color, or active matrix color (TFT). As volume and manufacturing capability have improved, the monochrome and passive color technologies were dropped from most product lines.

TFT-LCD is a variant of LCD which is now the dominant technology used for computer monitors.

The first standalone LCDs appeared in the mid-1990s selling for high prices. As prices declined over a period of years they became more popular, and by 1997 were competing with CRT monitors. Among the first desktop LCD computer monitors was the Eizo L66 in the mid-1990s, the Apple Studio Display in 1998, and the Apple Cinema Display in 1999. In 2003, TFT-LCDs outsold CRTs for the first time, becoming the primary technology used for computer monitors. The main advantages of LCDs over CRT displays are that LCD's consume less power, take up much less space, and are considerably lighter. The now common active matrix TFT-LCD technology also has less flickering than CRTs, which reduces eye strain. On the other hand, CRT monitors have superior contrast, have a superior response time, are able to use multiple screen resolutions natively, and there is no discernible flicker if the refresh rate is set to a sufficiently high value. LCD monitors have now very high temporal accuracy and can be used for vision research.

High dynamic range (HDR) has been implemented into high-end LCD monitors to improve color accuracy. Since around the late 2000s, widescreen LCD monitors have become popular, in part due to television series, motion pictures and video games transitioning to high-definition (HD), which makes standard-width monitors unable to display them correctly as they either stretch or crop HD content. These types of monitors may also display it in the proper width, however they usually fill the extra space at the top and bottom of the image with black bars. Other advantages of widescreen monitors over standard-width monitors is that they make work more productive by displaying more of a user's documents and images, and allow displaying toolbars with documents. They also have a larger viewing area, with a typical widescreen monitor having a 16:9 aspect ratio, compared to the 4:3 aspect ratio of a typical standard-width monitor.

Organic light-emitting diode (OLED) monitors provide higher contrast and better viewing angles than LCD's but they require more power when displaying documents with white or bright backgrounds. In 2011, a 25-inch (64 cm) OLED monitor cost $7500, but the prices are expected to drop.

The performance of a monitor is measured by the following parameters: 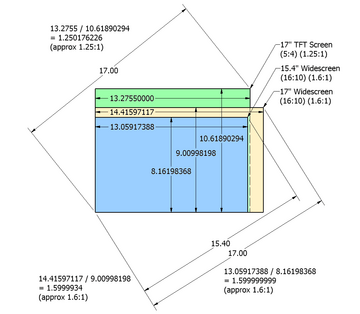 The area, height and width of displays with identical diagonal measurements vary dependent on aspect ratio

On two-dimensional display devices such as computer monitors the display size or view able image size is the actual amount of screen space that is available to display a picture, video or working space, without obstruction from the case or other aspects of the unit's design. The main measurements for display devices are: width, height, total area and the diagonal.

The size of a display is usually by monitor manufacturers given by the diagonal, i.e. the distance between two opposite screen corners. This method of measurement is inherited from the method used for the first generation of CRT television, when picture tubes with circular faces were in common use. Being circular, it was the external diameter of the glass envelope that described their size. Since these circular tubes were used to display rectangular images, the diagonal measurement of the rectangular image was smaller than the diameter of the tube's face (due to the thickness of the glass). This method continued even when cathode ray tubes were manufactured as rounded rectangles; it had the advantage of being a single number specifying the size, and was not confusing when the aspect ratio was universally 4:3.

With the introduction of flat panel technology, the diagonal measurement became the actual diagonal of the visible display. This meant that an eighteen-inch LCD had a larger visible area than an eighteen-inch cathode ray tube. 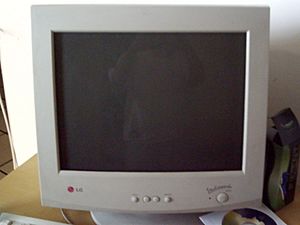 Until about 2003, most computer monitors had a 4:3 aspect ratio and some had 5:4. Between 2003 and 2006, monitors with 16:9 and mostly 16:10 (8:5) aspect ratios became commonly available, first in laptops and later also in standalone monitors. Reasons for this transition was productive uses for such monitors, i.e. besides widescreen computer game play and movie viewing, are the word processor display of two standard letter pages side by side, as well as CAD displays of large-size drawings and CAD application menus at the same time. In 2008 16:10 became the most common sold aspect ratio for LCD monitors and the same year 16:10 was the mainstream standard for laptops and notebook computers.

In 2010 the computer industry started to move over from 16:10 to 16:9 because 16:9 was chosen to be the standard high-definition television display size, and because they were cheaper to manufacture.

In 2011 non-widescreen displays with 4:3 aspect ratios were only being manufactured in small quantities. According to Samsung this was because the "Demand for the old 'Square monitors' has decreased rapidly over the last couple of years," and "I predict that by the end of 2011, production on all 4:3 or similar panels will be halted due to a lack of demand."

Most modern monitors will switch to a power-saving mode if no video-input signal is received. This allows modern operating systems to turn off a monitor after a specified period of inactivity. This also extends the monitor's service life.

Some monitors will also switch themselves off after a time period on standby.

Most modern laptops provide a method of screen dimming after periods of inactivity or when the battery is in use. This extends battery life and reduces wear.

Many monitors have other accessories (or connections for them) integrated. This places standard ports within easy reach and eliminates the need for another separate hub, camera, microphone, or set of speakers. These monitors have advanced microprocessors which contain codec information, Windows Interface drivers and other small software which help in proper functioning of these functions.

Some displays, especially newer LCD monitors, replace the traditional anti-glare matte finish with a glossy one. This increases color saturation and sharpness but reflections from lights and windows are very visible. Anti-reflective coatings are sometimes applied to help reduce reflections, although this only mitigates the effect.

In about 2009, NEC/Alienware together with Ostendo Technologies (based in Carlsbad, CA) were offering a curved (concave) 43-inch (110 cm) monitor that allows better viewing angles near the edges, covering 75% of peripheral vision. This monitor had 2880x900 resolution, LED backlight and was marketed as suitable both for gaming and office work, while for $6499 it was rather expensive. While this particular monitor is no longer in production, most PC manufacturers now offer some sort of curved desktop display.

Newer monitors are able to display a different image for each eye, often with the help of special glasses, giving the perception of depth.

A directional screen which generates 3D images without headgear.

These monitors use touching of the screen as an input method. Items can be selected or moved with a finger, and finger gestures may be used to convey commands. The screen will need frequent cleaning due to image degradation from fingerprints.

Monitors that feature an aspect ratio of 21:9 as opposed to the more common 16:9.

All content from Kiddle encyclopedia articles (including the article images and facts) can be freely used under Attribution-ShareAlike license, unless stated otherwise. Cite this article:
Computer monitor Facts for Kids. Kiddle Encyclopedia.