The spotted seal (Phoca largha), also known as the larga seal or largha seal, is a member of the family Phocidae, and is considered a "true seal". It inhabits ice floes and waters of the north Pacific Ocean and adjacent seas. It is primarily found along the continental shelf of the Beaufort, Chukchi, Bering and Okhotsk Seas and south to the northern Yellow Sea and it migrates south as far as northern Huanghai and the western Sea of Japan. It is also found in Alaska from the southeastern Bristol Bay to Demarcation Point during the ice-free seasons of summer and autumn when spotted seals mate and have pups. Smaller numbers are found in the Beaufort Sea. It is sometimes mistaken for the harbor seal to which it is closely related and spotted seals and harbor seals often mingle together in areas where their habitats overlap.

The scientific name originated in the Greek word for seal, phoce, and larga, the term used by the Siberian Tungus people for this seal. The English common name is comes from this seal's characteristic dark, irregularly shaped spots. Alaskan Eskimo names include issuriq (Central Alaskan Yup'ik language), gazigyaq in St. Lawrence Island Yupik, and qasigiaq in Inupiaq. 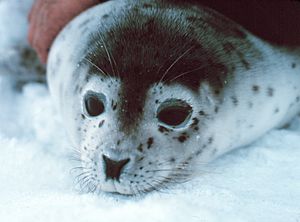 Spotted seal showing narrow snout like that of a dog

The spotted seal is of the family, Phocidae, or "true seals". Compared to other true seals, they are intermediate in size, with mature adults of both sexes generally weighing between 180 and 240 pounds (81 to 109 kg) and measuring 4.59 to 6.89 ft (1.5 to 2.1 meters), roughly the same size as a harbor seal or ribbon seal. The head of a spotted seal is round, with a narrow snout resembling that of a dog.

The spotted seal has a relatively small body and short flippers extending behind the body that provide thrust, while the small flippers in front act as rudders. The dense fur varies in color from silver to gray and white and is characterized by dark, irregular spots against the lighter background and covering the entire body. Males and females differ little in size or shape. In places where their habitat overlaps with that of the harbor seal, they can be confused with them, as in Bristol Bay, Alaska. Like harbor seals, spotted seals have 34 teeth. 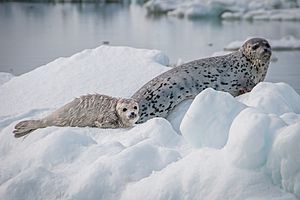 Spotted seal mother and pup in the Bering Sea

Spotted seals are inhabitants of arctic or sub-arctic waters, often in the outer areas of ice floes during the breeding season. They tend not to live within dense drift ice. In the summer months they live in the open ocean or on nearby shores.

Spotted seals are separated into three populations. The Bering Sea population includes approximately 100,000 in the western Bering Sea near Kamchatka, in the Gulf of Anadyr in Russia, and in the eastern Bering Sea in Alaskan waters (the only population in the US). A second population of about 100,000 seals breeds in the Sea of Japan and the Sea of Okhotsk. A third population of about 3,300 seals is to the south in Liaodong Bay, China and Peter the Great Bay, Russia. There is also a smaller population of 300 grey spotted seals living in waters off Baekryeong Island located far north of the west coast of South Korea.In order to prevent the squabble from being fought by water-bombing rocks on Baengnyeong Island, the Hani Sea Water Leopard Artificial Rest Area has been set up.

Spotted seals are relatively shy and are difficult for humans to approach. They can be solitary in general but are gregarious and form large groups during pupping and molting seasons when they haul out on ice floes or, lacking ice, on land. The numerically largest groups in Alaska are at Kasegaluk Lagoon in the Chukchi Sea, near Cape Espenburg in Kotzebue Sound, and in Kuskokwim Bay on sandbars and shoals, where several thousand may collect.

Sexual maturity is attained around the age of four. January to mid-April is the breeding season. Pup births peak in mid-March. Spotted seals are believed annually monogamous, and during breeding season, they form "families" made up of a male, female, and their pup, born after a 10-month gestation period. Average birth size is 3 ft (1 m) and 26 lbs. Pups are weaned six weeks later. The maximum lifespan of the spotted seal is 35 years with few living beyond 25.

Spotted seals dive to depths up to 1,000 ft (300 m) while feeding on a variety of ocean prey. Juveniles eat primarily krill and small crustaceans while adults eat a variety of fish including herring, arctic cod, pollock, and capelin. They do not seem to vocalize a lot, although not much is known about their vocalizations. They appear to vocalize more while in molting groups. When approached in these groups, they make various sounds such as growls, barks, moans, and roars.

Based on satellite tracking conducted on Yellow Sea population, it was revealed that seals migrate more than 3,300 km.

On March 28, 2008, the U.S. National Oceanic and Atmospheric Administration (NOAA) initiated a status review under the Endangered Species Act (ESA) to determine if listing this ice seal species under the ESA was warranted. After an 18-month review of the status of the spotted seal, NOAA announced on October 15, 2009 that two of the three spotted seal populations, together numbering 200,000 seals in or adjacent to Alaska, are not in danger of becoming extinct, nor are they likely to become so in the "foreseeable future", even though global warming has caused a loss in arctic ice mass. The announcement stated: "We do not predict the expected fluctuations in sea ice will affect them enough to warrant listing at this time."
In South Korea, spotted seals have been designated Natural Monument No. 331 and second-class endangered species. This is because the seals from South Korea travel to Dalian, China to breed every year where several thousands are harvested for their sealskin to be sold on the black market for Chinese medicine. An environmental activist group Green Korea United is currently working closely with local Chinese government to stop the seals from being poached by Chinese fishermen.

All content from Kiddle encyclopedia articles (including the article images and facts) can be freely used under Attribution-ShareAlike license, unless stated otherwise. Cite this article:
Spotted seal Facts for Kids. Kiddle Encyclopedia.