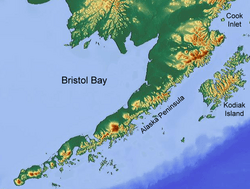 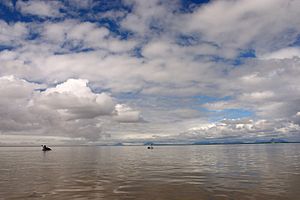 Upper reaches of Bristol Bay experience some of the highest tides in the world. One such reach, the Nushagak Bay near Dillingham and another near Naknek in Kvichak Bay have tidal extremes in excess of 10 m (30 ft), ranking them — and the area — as eighth highest in the world. This, coupled with the extreme number of shoals, sandbars and shallows, makes navigation troublesome, especially during the area's frequently strong winds. As the shallowest part of the Bering Sea, Bristol Bay is one of the most dangerous areas for large vessels. 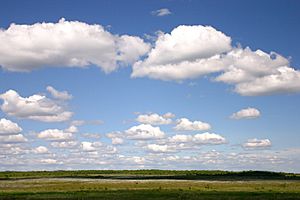 In ancient times, much of Bristol Bay was dry and arable, along with much of the Bering Sea Land Bridge. More recently, its proximity to mineral, animal and seafood riches provided incentive for human habitation along its shoreline. Early Russian and English exploration provided most of the non-native influences of the area. During his voyage through the area in 1778, the famed British navigator and explorer, Captain James Cook named the area "in honor of the Admiral Earl of Bristol" in England. 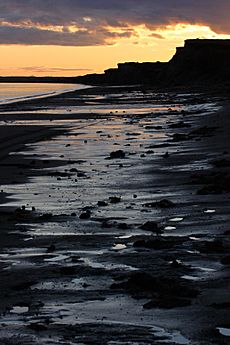 After establishing some temporary settlements in the late 1790s, The Russian American Company sent exploratory parties to document the coast and nearby inland areas of Bristol Bay. One of these charted the area between the Kuskokwim and Nushagak Rivers. Later, in 1819, an Aleut by the name of Andrei Ustiugov drew the first intensive charts of Bristol Bay. Additionally, ships of the Russian Navy conducted extensive surveys of the Bering Sea coastline into the mid-19th century, naming many of the geographical features commonly used today: Capes Constantine, Chichagof, Menshikof and Greig, Mounts Veniaminof and Pavlof, Becharof Lake, etc. 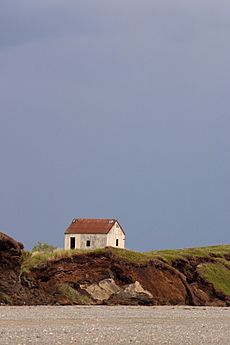 All of these communities are primarily inhabited by Alaska Natives, except for Dillingham and King Salmon; the former being influenced early-on by white salmon-cannery employees of European descent and the latter being heavily populated by military personnel stationed, primarily during Cold War years, at the nearby King Salmon Air Force Station and later by visitors and employees of the nearby Katmai National Park and Preserve.

A mineral exploration project investigating a large porphyry copper, gold, and molybdenum deposit in the Bristol Bay region has been proposed and may be undertaken by British-Australian conglomerate Mitsubishi. Because of the estimated 10 billion tons of mining waste that must be permanently stored in the area, which is an active earthquake zone, and Rio Tinto's environmental track record, which is seen as poor by many environmental advocacy groups, fears have been raised about the potential impact on the Bristol Bay area and its wildlife and residents. In April 2003, Environmental Protection Agency issued an assessment of the impact of the proposed mining operations on fisheries, wildlife and native Alaska tribes.

All content from Kiddle encyclopedia articles (including the article images and facts) can be freely used under Attribution-ShareAlike license, unless stated otherwise. Cite this article:
Bristol Bay Facts for Kids. Kiddle Encyclopedia.