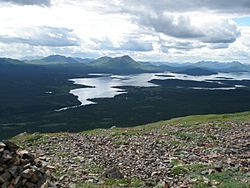 Aleknagik lake, with the village of Aleknagik apparent in the lower left of the picture

Aleknagik (/əˈlɛknəɡɪk/ ə-LEK-nə-gik; Alaqnaqiq in Central Yup'ik) is a second class city in the Dillingham Census Area of the Unorganized Borough of the U.S. state of Alaska. The population was 219 at the 2010 census.

Aleknagik is located at the head of the Wood River on the southeast end of Lake Aleknagik, 16 miles (26 km) northwest of Dillingham. The city is named after Aleknagik Lake.

Aleknagik is in a transitional climate zone. The primary influence is maritime, although a continental climate does affect the weather here. Average summer temperatures range from 30 to 66 °F (−1 to 19 °C). Average winter temperatures range from 4 to 30 °F (−16 to −1 °C). Annual precipitation is 20 to 35 inches (510 to 890 mm) and annual snowfall is 93 inches (240 cm). Fog and low clouds are common during July and August, and may preclude access. The lake and river are ice-free from June through mid-November.

Wood River and Aleknagik Lake have been used historically as summer fish camps. The spelling of the Yupik word "Aleknagik" has been disputed, because Yupik was an unwritten language. The name was described by the resident Yako family in 1930 as meaning "Wrong Way Home", because Nushagak River residents returning to their homes upriver would sometimes become lost in the fog and find themselves swept up the Wood River with the tide, inadvertently arriving at Aleknagik Lake.

Recorded history may not define the exact place of Aleknagik, and various reports have reported the original site with the name "Alaqnaqiq" as far to the south near entrance to the Wood River. James Van Stone, an anthropologist who traveled to Saint Petersburg and read diaries of the Russian explorers from 1867, noted that explorers traveled to "Aleknagik Lake" (in a spelling that is Russian but sounds out to Aleknagik).

In 2005, the Alaska Department of Natural Resources applied to own the waterways and compiled an extensive history of the area in their application (see Links below).

The 1929 U.S. Census found 55 people living in the "Wood River village" area to the south. During 1930, there were five families living on the shores of the lake year-round, the Waskeys, Polleys, Hansons, Yakos, and Smiths. A log cabin territorial school was built on the south shore of the lake in 1933, and Josie Waskey was the first teacher. Attracted by the school, other facilities, and plentiful fish, game and timber, a number of families from the Goodnews, Togiak, and Kulukak areas relocated to Aleknagik. A post office was established in 1937. A two-story framed school with a teacher apartment was constructed in 1938. By 1939, Aleknagik had 78 residents, over 30 buildings, and a small sawmill. In the late 1940s, a Seventh-day Adventist mission and school were established on the north shore. During the 1950s, a Moravian church and a Russian Orthodox church were built in Aleknagik, and over 35 families lived along the lake. In 1959, the state constructed a 25-mile (40 km) road connecting the south shore to Dillingham. The road was passable only during the summer months, until the late 1980s when it was upgraded and maintained year-round. The city was incorporated in 1973. Over 24 additional square miles were annexed to the city in April 2000.

In the mid-1950s, Moravian church members formed a colony on the north shore of the lake, across from the post office. The Moravian pastor and his wife's family built homes there and remain in the community.

In the late 19th century there were about 200 people in Aleknagik and the other Wood River villages. Varied illnesses killed most of the residents of the villages. The few survivors moved out of the area. In fall of 1930, there was one Yupik family living at the top of the Wood River in Aleknagik, and the village grew to about 40 people by 1931. A United States post office was opened in 1937 by Mable Smith. By 1940, Aleknagik had over 30 buildings, including a community school, church, and small sawmill. The local religious mission school, run by Seventh-day Adventists, brought several new families to Aleknagik. Other families came to the village because of the territorial school.

In 1938, a territorial school was constructed in Aleknagik. During this period, a Moravian church, a Russian Orthodox church and a Seventh-day Adventist mission school were established in the community. In 1959, the State of Alaska constructed a 22-mile (35 km) road connecting Aleknagik to Dillingham.

The Aleknagik Traditional Council, a federally-recognized tribe, is located in the community.

In August 2010, an airplane carrying former Senator Ted Stevens crashed near Alegnagik, resulting in the death of Stevens and four others.

There were 70 households out of which 41.4% had children under the age of 18 living with them, 48.6% were married couples living together, 11.4% had a female householder with no husband present, and 24.3% were non-families. 17.1% of all households were made up of individuals and 2.9% had someone living alone who was 65 years of age or older. The average household size was 3.16 and the average family size was 3.62.

Many residents participate in commercial and subsistence activities on the Bristol Bay coast during the summer. 33 residents hold commercial fishing permits. Trapping is also an important means of income. Most families depend to some extent on subsistence activities to supplement their livelihoods. Salmon, freshwater fish, moose, caribou, and berries are harvested. Poor fish returns and prices since 1997 have significantly affected the community.

Aleknagik is the only village in the region coming close to a road link with Dillingham; a 25-mile (40 km) road connects to the south shore of Aleknagik Lake from which the city is within walking distance. The "New Aleknagik" airport is a State-owned 2,070-foot-long (630 m) by 90-foot-wide (27 m) gravel airstrip located on the north shore, and regular flights are scheduled through Dillingham. The north shore of the lake is not road accessible; residents use skiffs to travel to town on the south shore. Moody's Aleknagik Seaplane Base, also on the north shore, accommodates float planes. There are two additional airstrips, the public Tripod Airport, a 1,250-foot (380 m) turf-gravel airstrip located 2 miles (3 km) southeast of Aleknagik, and the Adventist Mission School Airport, a 1,200-foot (370 m) gravel/dirt airstrip with a crosswind runway. The State owns and operates a 100-foot (30 m) dock on the north shore of Aleknagik Lake. A breakwater, barge landing, boat launch ramp and boat lift are available on the north shore. Vehicles, skiffs, ATVs and snowmachines are the most frequent means of local transportation.

Sales tax in the community is 5%, and there is also a 5% accommodations tax. There is no property tax.

All content from Kiddle encyclopedia articles (including the article images and facts) can be freely used under Attribution-ShareAlike license, unless stated otherwise. Cite this article:
Aleknagik, Alaska Facts for Kids. Kiddle Encyclopedia.