The Kuskokwim River or Kusko River (Yup'ik: Kusquqvak; Upper Kuskokwim: Dichinanek' ; Russian: Кускоквим (Kuskokvim)) is a river, 702 miles (1,130 km) long, in Southwest Alaska in the United States. It is the ninth largest river in the United States by average discharge volume at its mouth and seventeenth largest by basin drainage area.

The river provides the principal drainage for an area of the remote Alaska Interior on the north and west side of the Alaska Range, flowing southwest into Kuskokwim Bay on the Bering Sea. The highest point in its watershed is Mount Russell. Except for its headwaters in the mountains, the river is broad and flat for its entire course, making it a useful transportation route for many types of watercraft, as well as road vehicles during the winter when it is frozen over. It is the longest free flowing river in the United States.

Kuskokwim is a loose transliteration of a Yup'ik word. It is a compound word meaning big slow moving thing.

The river's name comes from the Yup'ik, kusquqviim, recorded by a Russian sailor in 1826. An obsolete Tanana (Athabaskan) name for the river was Chin-ana. Upper Kuskokwim (Kolchan) is often used to mean the people of the upper parts of the river, while Yup'ik people live along the lower river. 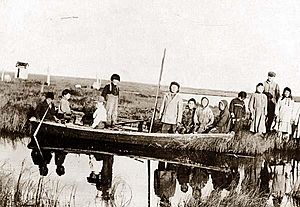 In southwest Alaska the river emerges from the Kuskokwim Mountains in a vast lake-studded alluvial plain south of the Yukon River, surrounded by vast spruce forests. It passes a series of Yup'ik villages, including Aniak, and approaches within 50 mi (80 km) of the Yukon before diverging southwest. Southwest of Bethel, the largest community on the river, it broadens into a wide marshy delta that enters Kuskokwim Bay approximately 50 mi (80 km) SSW of Bethel. The lower river below Aniak is located within the Yukon Delta National Wildlife Refuge.

The principal economic activities along the river have historically been fur trapping and fishing. Subsistence fishing for salmon and whitefish provides a staple of the Yup'ik diet along the river. Economic deposits of placer gold were discovered in 1901 near Aniak. Mineral production in the region has mainly been from scattered placer gold deposits that through 2004 had produced a total of 3.5 million troy ounces of gold. The primary route of the Iditarod Trail follows the South Fork Kuskokwim River out of the Alaska Range and crosses the main stem of the river near McGrath.

All content from Kiddle encyclopedia articles (including the article images and facts) can be freely used under Attribution-ShareAlike license, unless stated otherwise. Cite this article:
Kuskokwim River Facts for Kids. Kiddle Encyclopedia.