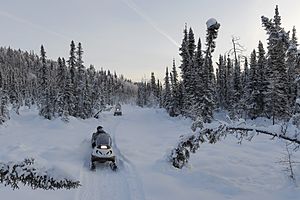 US Marines deliver Toys for Tots to McGrath, December 2015

McGrath (Tochak’ in Upper Kuskokwim, Digenegh in Deg Xinag) is a city and village in on the Kuskokwim River in Alaska, United States. The population was 401 at the 2000 census and 346 as of the 2010 census. Despite its small population, the village is an important transportation and economic hub for the area.

The Old Town McGrath site, across the river from present-day McGrath, was a meeting and trading place for Big River, Nikolai, Telida, and Lake Minchumina villagers.

In 1904, Abraham Appel established a trading post in Old Town. In 1906, gold was discovered in the Innoko District, and in 1907, and at Ganes Creek. Since McGrath was the northernmost point on the Kuskokwim River accessible by large riverboats, it became a regional supply center. A town was established at the site of Old McGrath in 1907, and was named for Peter McGrath, a local United States Marshal. The Iditarod Trail also contributed to McGrath's role as a supply center. From 1911 to 1920, hundreds of people walked and mushed over the trail on their way to the Ophir gold districts. Mining sharply declined after 1925.

After a major flood in 1933, some residents moved across the river. Changes in the course of the river eventually left the old site on a slough, making it useless as a river stop. In 1940, an airstrip was cleared, the United States Federal Aviation Administration built a communications complex, and a school was opened. McGrath became an important refueling stop for Lend-Lease equipment during World War II.

McGrath is located on the south bank of the Kuskokwim River in western Alaska.

There were 145 households out of which 42.8% had children under the age of 18 living with them, 45.5% were married couples living together, 11.7% had a female householder with no husband present, and 31.7% were non-families. 26.9% of all households were made up of individuals and 4.8% had someone living alone who was 65 years of age or older. The average household size was 2.77 and the average family size was 3.34.

All content from Kiddle encyclopedia articles (including the article images and facts) can be freely used under Attribution-ShareAlike license, unless stated otherwise. Cite this article:
McGrath, Alaska Facts for Kids. Kiddle Encyclopedia.