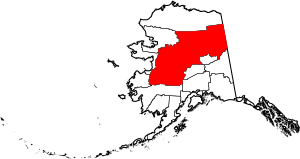 Yukon-Koyukuk Census Area is a census area in the U.S. state of Alaska. As of the 2010 census, the population was 5,588. It has the largest area of any county or county-equivalent in the United States. It is part of the unorganized borough of Alaska and therefore has no borough seat. Its largest communities are the cities of Galena, in the west, and Fort Yukon, in the northeast.

All content from Kiddle encyclopedia articles (including the article images and facts) can be freely used under Attribution-ShareAlike license, unless stated otherwise. Cite this article:
Yukon–Koyukuk Census Area, Alaska Facts for Kids. Kiddle Encyclopedia.