Ruby (Koyukon: Tl'aa'ologhe) is an incorporated town in central western Alaska, situated on the south bank of the Yukon River at the northwesternmost tip of the Nowitna National Wildlife Refuge. It is accessible only by boat or air. A formerly sizeable gold-mining and lumbering town servicing the region, at the 2010 census the population was just 166, with only a general store and post office remaining as businesses, down from 188 in 2000. 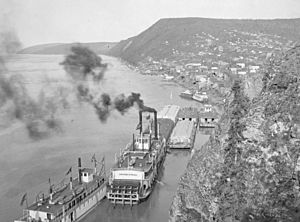 Riverboats on the Yukon River at Ruby during the town's heyday. ca. 1910

The town of Ruby was established in 1911 as the result of a gold rush. Gold was first discovered at the current townsite in 1906 on Ruby Creek. That discovery brought more prospectors to the area. In 1910 word leaked out about a gold strike on Long Creek, 30 miles south of Ruby, and a stampede was on. Discoveries on other nearby creeks followed and Ruby became the supply point for the mines.

At its peak the population was near 3000. By 1918 the town was in decline. Many of the men had left to fight in World War I and several of the towns business people and their families were lost in the sinking of the ship Sophia.

A fire in 1929 destroyed much of the business district and a flood in 1931 took out what was left of buildings on the riverfront.

After World War II the population of the community had left. Natives from the village of Kokrines moved in to take advantage of the abandoned homes. There are currently fewer than 200 people living in Ruby.

Local residents nicknamed the town The Gem of the Yukon, because it is located along the Yukon River and the name resembles that of a ruby gemstone.

According to the United States Census Bureau, the city has a total area of 7.6 square miles (20 km2).

Ruby first appeared on the 1920 U.S. Census as an unincorporated village. It formally incorporated in 1973.

There were 68 households, out of which 44.1% had children under the age of 18 living with them, 35.3% were married couples living together, 16.2% had a female householder with no husband present, and 38.2% were non-families. 32.4% of all households were made up of individuals, and 10.3% had someone living alone who was 65 years of age or older. The average household size was 2.76 and the average family size was 3.55.

The Yukon–Koyukuk School District operates the Merreline A. Kangas School in Ruby.

All content from Kiddle encyclopedia articles (including the article images and facts) can be freely used under Attribution-ShareAlike license, unless stated otherwise. Cite this article:
Ruby, Alaska Facts for Kids. Kiddle Encyclopedia.