Arctic Village (Vashrąįį K'ǫǫ in Gwich'in) is an unincorporated Native American village and a census-designated place (CDP) in Yukon-Koyukuk Census Area, Alaska, United States. As of the 2010 census, the population of the CDP was 152. This was unchanged from 2000. The village is located in the large Gwitch'in speaking region of Alaska, and the local dialect is known as Di'haii Gwitch'in or Kutchin. As of 1999, over 95% of the community speaks and understands the language. (Kraus, 1999)

Evidence from archaeological investigations indicate that the Arctic Village area may have been settled as early as 4500 BC. Around 500 AD the Athabascan speaking Gwich’in people (often called Neets'aii Gwich'in or “those who dwell to the north”) came into the area with seasonal hunting and fishing camps. About 1900, the village became a permanent settlement.

There were 52 households, out of which 44.2% had children under the age of 18 living with them, 25.0% were married couples living together, 21.2% had a female householder with no husband present, and 40.4% were non-families. 32.7% of all households were made up of individuals, and 3.8% had someone living alone who was 65 years of age or older. The average household size was 2.92 and the average family size was 3.58. 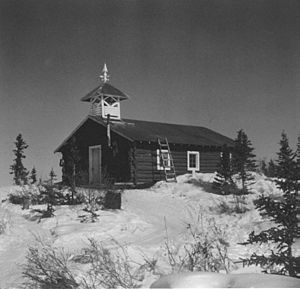 All content from Kiddle encyclopedia articles (including the article images and facts) can be freely used under Attribution-ShareAlike license, unless stated otherwise. Cite this article:
Arctic Village, Alaska Facts for Kids. Kiddle Encyclopedia.