Fort Yukon (Gwichyaa Zheh in Gwich'in) is a city in the Yukon-Koyukuk Census Area in the U.S. state of Alaska, straddling the Arctic Circle. The population, predominantly Gwich'in Alaska Natives, was 583 at the 2010 census, down from 595 in 2000.

Fort Yukon is the hometown of Alaska Congressman Don Young. Served by Fort Yukon Airport, it is also known for having the record highest temperature in Alaska.

This area north of the Arctic Circle was occupied for thousands of years by cultures of indigenous people and in historic times by the Gwich’in people.

What became the village of Fort Yukon developed from a trading post, Fort Yukon, established by Alexander Hunter Murray of the Hudson's Bay Company, on 25 June 1847. Murray drew numerous sketches of fur trade posts and of people and wrote the Journal of the Yukon, 1847–48, which gave valuable insight into the culture of the Gwich’in at the time. While the post was in Russian America, the Hudson's Bay Company continued to trade there until the American traders expelled it in 1869, following the Alaska Purchase when the Alaska Commercial Company took over the post.

During the Klondike Gold Rush, in the winter of 1897-1898, Fort Yukon received two hundred prospectors from Dawson City, which was short of supply. A post office was established on July 12, 1898 with John Hawksly as its first postmaster. The settlement suffered over the following decades as a result of several infectious disease epidemics and a 1949 flood.

During the 1950s, the United States Air Force established a base and radar station at Fort Yukon; the town was officially incorporated in 1959. Since the late 20th century, due in part to its extreme northerly location and its proximity to Fairbanks, it has become a minor tourist destination.

On February 7, 1984 a Terrier Malemute-type sounding rocket, with a maximum altitude of 310 miles (500 km), was launched from Fort Yukon. 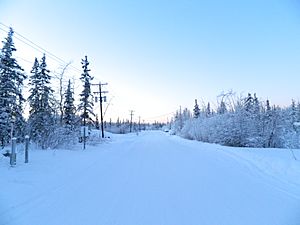 Fort Yukon village street on the Winter Solstice, before sunrise at 11:30 am.

It is located 8 miles (13 km) north of the Arctic Circle, at the confluence of the Yukon and Porcupine Rivers and in the middle of the Yukon Flats.

The highest temperature ever recorded in Alaska occurred in Fort Yukon on June 27, 1915, when it reached 100 °F or 37.8 °C. Until 1971, Fort Yukon also held the all-time lowest temperature record at −78 °F or −61.1 °C, and it still holds the record for the lowest mean monthly temperature when the notoriously cold month of December 1917 had an average daily temperature of −48.3 °F or −44.6 °C and the minimum averaged −58 °F or −50 °C. The climate regime is a strong continental subarctic climate with severe winters, being less influenced by chinook winds than areas to the west – the winter season absolute maximum being 17 °F or 9.4 °C colder than in Fairbanks. Summer temperatures are exceptionally high for such a northerly area, being far warmer than the tree line threshold.

Fort Yukon first appeared on the 1880 U.S. Census as an unincorporated village of 109 residents. Of those, 107 were members of the Tinneh Tribe and 2 were Whites. It did not appear on the 1890 census, but has returned in every successive census since 1900. It formally incorporated in 1959, the year Alaska became a state.

There were 225 households, out of which 36.0% had children under the age of 18 living with them, 25.8% were married couples living together, 23.1% had a female householder with no husband present, and 39.1% were non-families. 34.2% of all households were made up of individuals, and 5.8% had someone living alone who was 65 years of age or older. The average household size was 2.62 and the average family size was 3.37.

All content from Kiddle encyclopedia articles (including the article images and facts) can be freely used under Attribution-ShareAlike license, unless stated otherwise. Cite this article:
Fort Yukon, Alaska Facts for Kids. Kiddle Encyclopedia.