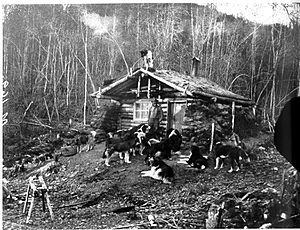 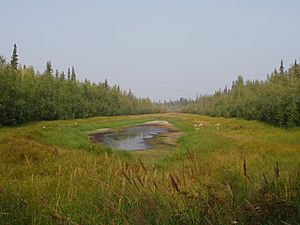 The Yukon Flats straddle the Arctic Circle and have an extremely variable climate. Temperatures of 95 F (35 °C) are not uncommon in summer, while winter temperatures have been known to drop to -70 F (-57 °C).

Several hundred Alaska Natives and others live in the Yukon Flats area. Though most of the region's people are concentrated in the villages of Fort Yukon, Venetie, Beaver, Stevens Village, Chalkyitsik, and smaller settlements, numerous hunting cabins and seasonal settlements also dot the region. The region also potentially contains a large deposit of crude oil and natural gas.

In 2008, a land trade was proposed between Doyon, Limited and the federal government. The exchange was to consolidate land holdings by the native corporation but was not completed.

All content from Kiddle encyclopedia articles (including the article images and facts) can be freely used under Attribution-ShareAlike license, unless stated otherwise. Cite this article:
Yukon Flats Facts for Kids. Kiddle Encyclopedia.