Minto (Tanana: Menhti) is a census-designated place (CDP) in Yukon-Koyukuk Census Area, Alaska, United States. As of the 2020 census, the population of the CDP is 150, down from 210 in 2010. The name is an anglicized version of the Lower Tanana Athabaskan name Menhti meaning 'among the lakes'. After repeated flooding the village was relocated to its present location in 1969. The former village site is now known as Old Minto. 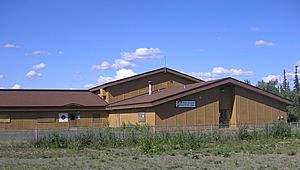 Minto school's athletic teams are known as the Lakers due to the town's proximity to several lakes formed by the flow of the Tolovana River.

There were 74 households, out of which 39.2% had children under the age of 18 living with them, 33.8% were married couples living together, 21.6% had a female householder with no husband present, and 27.0% were non-families. 25.7% of all households were made up of individuals, and 9.5% had someone living alone who was 65 years of age or older. The average household size was 3.49 and the average family size was 4.15.

Although a small community, it has a small landing strip called Minto Airport. It gives direct flights to Fairbanks. It is also served by the Old Minto Road, visible on Google Maps and on Google Earth imagery; it connects to the Elliot Highway, which itself runs between Fairbanks and Manley Hot Springs. 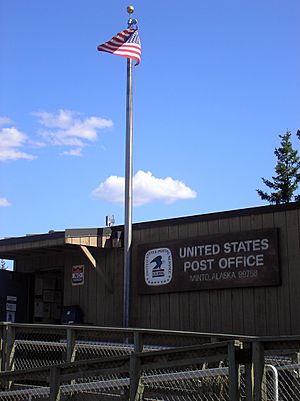 Minto is in the western part of traditional Tanana Athabaskan territory. During the late 1800s, some members of the nomadic Minto band traveled to Tanana, Rampart and Fort Yukon to trade furs for manufactured goods, tea and flour. After gold was discovered north of Fairbanks in 1902, steamboats began to travel on the Tanana River, bringing goods and people into the area. Old Minto, on the banks of the Tanana River, became a permanent settlement when some members of the Minto band built log cabins there. Other families lived there seasonally in tents. A school was established in 1937, but most families still did not live in Minto year-round until the 1950s. The people from the Minto band were eventually joined by families from Nenana, Toklat, Crossjacket and Chena.

Minto was relocated in 1969, due to repeated flooding and erosion. The present site is 65 km (40 mi) north of the old site. The new site had been used as a fall and winter camp since the early 1900s. New housing and a new school were completed by 1971.

The Old Minto Family Recovery Camp is a rustic treatment center operated by the Tanana Chiefs Conference relocated away from the old river edge village site. A residential program, it incorporates daily group and individual counseling for drug and alcohol addictions with traditional lifestyle activities and Athabascan cultural immersion. The old village site is used for seasonal celebrations including by the Cultural Heritage and Education Institute which provides curriculum elements in the school at New Minto.

The traditional language of Minto is Lower Tanana, one of eleven Athabaskan languages spoken in Alaska. As of 2010, "Speakers who grew up with Lower Tanana as their first language can be found only in the 250-person village of Minto."

All content from Kiddle encyclopedia articles (including the article images and facts) can be freely used under Attribution-ShareAlike license, unless stated otherwise. Cite this article:
Minto, Alaska Facts for Kids. Kiddle Encyclopedia.