Nenana (Lower Tanana: Toghotilicode: taa is deprecated ; is a home rule city in the Yukon-Koyukuk Census Area of the Unorganized Borough in the Interior of the U.S. state of Alaska. Nenana developed as a Lower Tanana community at the confluence where the tributary Nenana River enters the Tanana. The population was 378 at the 2010 census, down from 402 in 2000.

Completed in 1923, the 700-foot-long (210 m) Mears Memorial Bridge was built over the Tanana River as part of the territory's railroad project connecting Anchorage and Fairbanks.

Nenana is in the westernmost portion of Tanana territory. (The Tanana are among the large Dené language family, also known as Athabascan.) The town was first known by European Americans as Tortella, a transliteration of the Indian word Toghotthele (TOG-uh-TEE-lee), which means "mountain that parallels the river." It was later named for the river and the Nenana people who live nearby. The Nenana people became accustomed to contact with Europeans, due to trading journeys to the Village of Tanana, where Russians bartered Western goods for furs from 1838.

The United States purchased Alaska from Russia in 1867. Early American explorers and traders, such as Henry Tureman Allen, Arthur Harper and Bates, first entered the Tanana Valley in 1874 and 1885.

In 1902 the discovery of gold in Fairbanks brought intense activity to the region. The next year, Jim Duke built a trading post/roadhouse to supply river travelers and trade with the Nenana community.

In 1905 the Episcopal Church, which had missionaries in Alaska, built the St. Mark's Episcopal mission and Tortella School a short distance upriver. The boarding school taught about 28 children of various ages at a time. Hudson Stuck, the Archdeacon of the Yukon, regularly visited the settlement, part of the 250,000 square-acre territory of the Interior he administered. Native children from other communities, such as Minto, also attended school in Nenana.

A post office opened in 1908. In 1915, construction of the Alaska Railroad brought new settlers, who doubled Nenana's population. The railroad connected Nenana to the southern port city of Anchorage. The community incorporated as a city in 1921.

The Railroad Depot was completed in 1923. That year, United States President Warren Harding arrived to drive the final, golden spike at the north end of the 700-foot-long (210 m) Mears Memorial Bridge built over the Tanana River as part of the state's railroad project.

The construction had encouraged businesses and settlement in town. According to local records, 5,000 residents lived in Nenana by the early 1920s. After the railroad was completed, however, contractors and construction workers left the area. The city suffered an economic slump, and most of the residents migrated to seek work in other places. By 1930, the population had dropped to 291.

Nenana was the starting point for the 1925 serum run to Nome, after diphtheria antitoxin had been transported by rail from Anchorage. It was carried by dog sled to Nome to treat people in an epidemic.

In 1961, Clear Air Force Station was constructed 21 miles southwest. During this construction, many civilian contractors commuted from Nenana. A road was constructed south to Clear, but northbound vehicles had to be ferried across the Tanana River.

In 1967 the community was devastated by one of the largest floods ever recorded in the valley. In 1968 a $6 million bridge for vehicles was completed across the Tanana River, which gave the town a modern road link to Fairbanks and replaced the river ferry. The George Parks Highway was completed in 1971, providing a shorter, direct route to Anchorage.

The federally recognized tribe in the community is the Nenana Native Association, who traditionally spoke the Lower Tanana language. Under the Alaska Native Claims Settlement Act of 1971, they have rights of self-government and managing some of their traditional territory. According to the 2000 Census, 41% of the city residents were Native American (or Alaska Natives).

Residents of Nenana sponsor the Nenana Ice Classic, a nature-based lottery. Entrants buy a ticket and pick a date in April or May and a time, to the closest minute, when they think the winter ice on the Tanana River will break up. This lottery began in 1917 among a group of surveyors working for the Alaska Railroad. They formed a betting pool as they waited for the river to open and boats to arrive with needed supplies.

The competition is run as follows: a large striped tripod is placed on the frozen Tanana River and connected to a clock. The winner is whoever comes closest to guessing the precise time when the ice beneath weakens to the point that the tripod moves and stops the clock. Interest in the pool has increased and attracts bettors statewide. This lottery has paid out nearly $10 million in prize money, with the winning pool in recent years being near $300,000.

In the summer of 2008, Nenana suffered heavy damage due to flooding. The Tanana River reached its second-highest level since written record keeping began.

Nenana is located 55 road miles southwest of Fairbanks on the George Parks Highway and 304 road miles north of Anchorage. It is at mile 412 of the Alaska Railroad. The river is ice-free from early May to late October.

Nenana first reported on the 1910 U.S. Census as an unincorporated village. It formally incorporated in 1921.

There were 171 households, out of which 24.0% had children under the age of 18 living with them, 31.0% were married couples living together, 12.3% had a female householder with no husband present, and 49.1% were non-families. 42.1% of all households were made up of individuals, and 17.5% had someone living alone who was 65 years of age or older. The average household size was 2.35 and the average family size was 3.30. 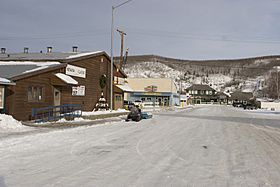 A Street is the main street of the Nenana townsite. The larger buildings seen in this view, from left to right: the Nenana Civic Center (which doubles as headquarters for the Nenana Ice Classic), Coghill's Store and the Nenana Depot of the Alaska Railroad.

Over 40% of the year-round jobs are with government, including the City, Tribe, Nenana School District, Yukon-Koyukuk School District, and highway maintenance by the Alaska Department of Transportation and Public Facilities. Golden Valley Electric Association has a regional office in Nenana. Nenana has a rural lifestyle but has good access to Fairbanks on the major north-south George Parks Highway.

Nenana has affordable housing and low rents. The private sector economy is based on its role as the center of rail-to-river barge transportation for the Interior. Crowley Marine is a major private employer, supplying villages along the Tanana and Yukon rivers each summer with cargo and fuel.

The City also attracts independent travelers with such attractions as the Alaska Railroad Museum, the Golden Railroad Spike Historic Park and Interpretive Center, the historical St. Mark's Episcopal Church (built in 1905), Iditarod dog kennels, and a replica of the sternwheeler Nenana. A heritage center features displays of local culture and history, and is open during the summer tourist season from May to September.

Nenana is a center of dog mushing; a number of world-class teams train in the area. It is also home to a number of artists whose works reflect the local frontier lifestyle. A number of large farms produce quality and specialized crops in some of the best growing conditions in Alaska. The Nenana Ice Classic administration provides employment for nearly 100 locals during the counting and tabulation of entries for the Tanana River ice breakup. Twenty-seven residents hold commercial fishing permits. Numerous Native and non-Native households rely on traditional subsistence foods, such as salmon, moose, caribou, bear, waterfowl and berries.

Nenana has air, river, road and railroad access. The George Parks Highway provides road access to Fairbanks and Anchorage. A boat landing at the end of 10th street turning west off the George Parks Highway provides free boat access to the Nenana River. A short distance north of the landing is the confluence of the Nenana and Tanana rivers, so boaters have easy access to the river system of the Tanana River and Minto Flats. The boat landing is used by hundreds of hunters and outdoor enthusiasts each year.

Nenana and the Ice Classic were featured in the 1938 movie Call of the Yukon. Richard Arlen and Beverly Roberts played a mis-matched pair on a trek to Nenana to escape a village famine.

Nenana was also featured in the 1995 movie Balto. Nenana was where the antitoxin was unloaded from the Alaska Railroad and run to Nome by dogsled.

All content from Kiddle encyclopedia articles (including the article images and facts) can be freely used under Attribution-ShareAlike license, unless stated otherwise. Cite this article:
Nenana, Alaska Facts for Kids. Kiddle Encyclopedia.